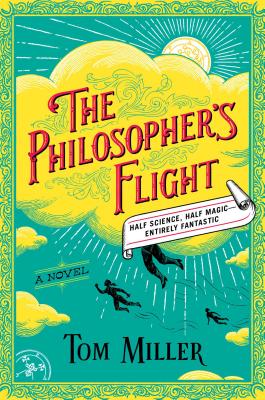 A Novel (The Philosophers Series #1)

“Rarely does a novel begin with rollicking fierceness that grabs readers from its opening lines and doesn’t loosen its grip or lessen its hold all the way through… Miller’s writing is intoxicating and one doesn’t need to be a fantasy or sci-fi fan to adore this book.” —Associated Press

“The Philosopher’s Flight by debut novelist Tom Miller has already set a high bar for any book vying to be the most entertaining novel of 2018.”—BookPage

A thrilling debut from ER doctor turned novelist Tom Miller, The Philosopher’s Flight is an epic historical fantasy set in a World-War-I-era America where magic and science have blended into a single extraordinary art. “Like his characters, Tom Miller casts a spell” (Matthew Pearl, author of The Dante Club and The Last Bookaneer).

Eighteen-year-old Robert Weekes is a practitioner of empirical philosophy—an arcane, female-dominated branch of science used to summon the wind, shape clouds of smoke, heal the injured, and even fly. Though he dreams of fighting in the Great War as the first male in the elite US Sigilry Corps Rescue and Evacuation Service—a team of flying medics—Robert is resigned to mixing batches of philosophical chemicals and keeping the books for the family business in rural Montana, where his mother, a former soldier and vigilante, aids the locals.

When a deadly accident puts his philosophical abilities to the test, Robert rises to the occasion and wins a scholarship to study at Radcliffe College, an all-women’s school. At Radcliffe, Robert hones his skills and strives to win the respect of his classmates, a host of formidable, unruly women.

Robert falls hard for Danielle Hardin, a disillusioned young war hero turned political radical. However, Danielle’s activism and Robert’s recklessness attract the attention of the same fanatical anti-philosophical group that Robert’s mother fought years before. With their lives in mounting danger, Robert and Danielle band together with a team of unlikely heroes to fight for Robert’s place among the next generation of empirical philosophers—and for philosophy’s very survival against the men who would destroy it.

In the tradition of Lev Grossman and Deborah Harkness, Tom Miller writes with unrivaled imagination, ambition, and humor. The Philosopher’s Flight is both a fantastical reimagining of American history and a beautifully composed coming-of-age tale for anyone who has ever felt like an outsider.

PRAISE FOR THE PHILOSOPHER'S FLIGHT BY TOM MILLER

“[Begins] with rollicking fierceness that grabs readers from its opening lines and doesn’t loosen its grip or lessen its hold all the way through… Miller’s writing is intoxicating and one doesn’t need to be a fantasy or sci-fi fan to adore this book. One only hopes Miller can manage to take a break from doctoring to write another book and another and another.”—Kim Curtis, Associated Press

“Part thriller, part romance, part coming-of-age fantasy, The Philosopher’s Flight by debut novelist Tom Miller has already set a high bar for any book vying to be the most entertaining novel of 2018…The wild and soaring The Philosopher’s Flight is as fun a read as you’ll come across. Miller appears to have left room for more at the story’s end; let’s hope this is the start of a new series.”—Ian Schwartz, Bookpage

"A very accomplished debut....measured, compelling, and well-paced. Exceeded my expectations...The real charm of The Philosopher’s Flight is in its characterization...Miller surrounds Robert with so many varied, opinionated, and interestingly flawed—with so many intensely human—women in a complex setting that it never comes close to being such a simplistic narrative."—Liz Borke, Tor.com

"Frothy and fun...There are many opportunities to go astray in a setup like this, but Robert's charmingly heroic character and Miller's woman-power alternate history set their feet right, delivering a yarn full of derring-do and historical asides."—Amazon's Ominvoracious Blog

"Miller does a fine job not only of building a fantastic magical world, but of imbuing it with a highly relatable political ambiance...The Philosopher's Flight is a book you’ll race through, not only because you want to know who won the philosopher’s race, but also to see what happens to Robert."—Book Reporter

"Readers who like to challenge themselves will have a field day with Tom Miller’s debut novel...It reads like Sinclair Lewis, but with a colorful candy coating to sweeten the bitter elements. Whether you’re delighted, intrigued, or alarmed by Mr. Miller’s America, you certainly won’t be bored. “The Philosopher’s Flight” is an excellent pick for a book club looking to expand its horizons and spark conversation."—Pittsburgh Post-Gazette

"Miller has done a clever and entertaining job of creating that world using actual history as his framework and overlaying it with the world of empirical philosophy that is rich in detail and development. This is a smart, funny book that pulls you in and keeps you going while also delivering sly social commentary."—Aspen Daily News


"Tom Miller’s tale The Philosopher’s Flight is imaginative enough that readers could almost believe they are entering a parallel universe when they open the book...Those who pick up this book will find it entertaining and satisfying on several levels."—Manhattan Mercury

"Spell-binding...a fantastical coming-of-age tale that will inspire and chill you." —Rhode Island Monthly

"A coming-of-age novel packed with adventure, romance, humor and social commentary, The Philosopher’s Flight recalls the magic realism novels of such writers as Lewis Shiner, Tim Powers and James P. Blaylock that operate in a recognizable world where magic—empirical philosophy, or sigilry—exists as an accepted reality."—South Bend Tribune

“The Philosopher’s Flight has all the right ingredients to launch an epic story, bringing us into a vivid world rich with both history and imagination. Its narrative of magic warriors and healers feels remarkably grounded and authentic. Like his characters, Tom Miller casts a spell.”—Matthew Pearl, New York Times bestselling author of The Dante Club and The Last Bookaneer

“In his first novel, Tom Miller creates a world that feels both fantastical and authentic, and he does it with a playful spirit and sharp wit. I’d follow his hero Robert Weekes anywhere. The Philosopher’s Flight is deeply original, utterly transporting, and absolutely fun.”—Janet McNally, author of Girls in the Moon

“Tom Miller is one of the rare literary geniuses I have read who possesses a sense of humor and The Philosopher's Flight displays both qualities in heady quantities. Go along for the ride and you will be stimulated, educated, as well as happily overcome by laughter.”—William O'Rourke, author of Idle Hands and Criminal Tendencies

“Tom Miller’s a sly wizard, reminiscent of L. Frank Baum on his best days, and The Philosopher’s Flight is a thrill-a-minute, genre-busting display of narrative spells and delights.”—Valerie Sayers, author of The Powers

“The Philosopher’s Flight is a romp of a tale... it will launch a hundred thousand glyphs and sigils in every reader’s imaginations.”—Sheheryar B. Sheikh, author of The Still Point of the Turning World