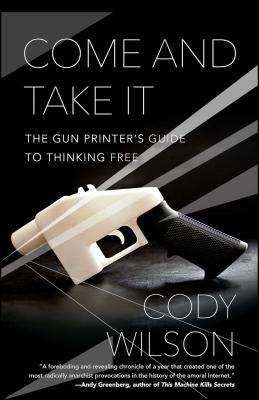 Come and Take It (Paperback)

A startling philosophical manifesto for the twenty-first century on freedom of information, Come and Take It is the controversial yet thrilling story of the first ever-3D printable gun, developed by self-described crypto-anarchist and rogue thinker Cody Wilson.

In Defense Distributed, Cody Wilson’s employees worked against all odds to defend liberty and the right to access arms through the production of 3D printed firearms. Now, Wilson crafts a unique and critical guide through the digital revolution and follows a group of digital radicals as they navigate political subterfuge—deflecting interference from the State Department and the Bureau of Alcohol, Tobacco, Firearms and Explosives—to create a technological miracle, against all odds.

Harkening to both Zen and the Art of Motorcycle Maintenance and The Anarchist Cookbook, Come and Take It combines elements of a modern-day thriller with a fascinating philosophical treatise, and Wilson paints a scathing and timely portrait of an ideologically polarized America and his own struggle in the fight for liberty.

Cody Wilson is a former student of the University of Texas School of Law. He is the founder and director of Defense Distributed, a non-profit organization that developed and published the world’s first open source gun designs suitable for 3D printing. Forbes called Wilson one of the most polarizing figures in technology, and Wired named him one of the fifteen most dangerous people in the world. Since the development of his firearm, the Liberator, Wilson has become the spokesperson for the digital arms revolution and an enfant terrible of the lecture circuit. He is a member of the tech fraternity unSYSTEM. His work has been featured in DOMUS Magazine, exhibited at the New Museum, and has been permanently acquired by London’s V&A, the world’s greatest museum of design.
or
Not Currently Available for Direct Purchase
Copyright © 2020 American Booksellers Association