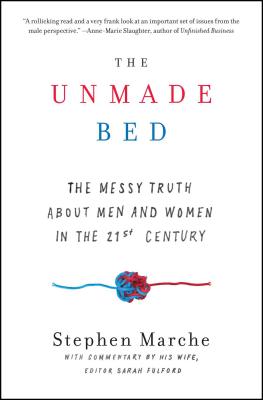 The Messy Truth about Men and Women in the 21st Century

“Satisfying food for thought on the ever-changing dynamics of men and women as they interact and go about their individual lives” (Kirkus Reviews) as cultural commentator Stephen Marche examines contemporary male-female relations—with the help of his wife, writer and editor Sarah Fulford.

One morning in New York City, Stephen Marche, then a new father and tenure-track professor, got the call: his wife had been offered her dream job…in Canada. Their decision to prioritize her career over his and move to Toronto sheds new light on the gender roles in their marriage (and in the world around them). As Marche provocatively argues, we are no longer engaged in a war of the sexes, but rather stuck together in a labyrinth of contradictions. And that these contradictions are keeping women from power and confounding male identity.

The Unmade Bed is a deeply researched, deeply personal exploration into the moments in everyday life where women and men meet. After all, within offices and homes, on the street, online, and in bed, we constantly ask ourselves: What are we expected to sacrifice? Is it possible to be equal? As he attempts to answer these questions, Marche explores the issues that define our modern conversations on gender, from mansplaining and sexual morality to parenthood and divisions of the domestic sphere. In the process, he discovers that true power remains shockingly elusive for women while the idea of masculinity struggles in a state of uncertainty. The only way out of these mutual struggles is together.

With footnote commentary throughout the book from Marche’s wife, The Unmade Bed is a “compelling” (The Globe and Mail, Toronto), uniquely balanced, and honest approach to the revolution going on in our everyday lives—a thought-provoking work of social science that is sure to be a conversation starter.

Stephen Marche is a novelist and culture writer. For the past five years he has written a monthly column for Esquire magazine, “A Thousand Words About Our Culture,” as well as regular features and opinion pieces for The Atlantic, The New York Times, The Wall Street Journal, The New Republic, and elsewhere. His books include three novels, Hunger of the Wolf, Raymond and Hannah, and Shining at the Bottom of the Sea, as well as The Unmade Bed and How Shakespeare Changed Everything. He lives in Toronto with his wife and children.

Praise For The Unmade Bed: The Messy Truth about Men and Women in the 21st Century…

“The Unmade Bed is a rollicking read and a very frank look at an important set of issues from the male perspective.” —Anne-Marie Slaughter, author of Unfinished Business

“We’re living in a confusing time. Men and women no longer neatly fit into prescribed gender roles, and yet those norms still wield enormous power. As the ground shifts precariously underfoot, Stephen Marche finds a deeply thoughtful, at times hilarious, even footing. Rather than the silly and cartoonish notion of the Battle of the Sexes, Marche argues in The Unmade Bed that we’re all picking our way through a labyrinth. It’s dark. The way unknown. Even a little scary. But Marche’s elegant book makes the case that stumbling toward a more human future, even with the occasional wrong turn, is well worth the effort.” —Brigid Schulte, author of Overwhelmed

“Marche pulls back the covers and shows life, love, and career in all its wonderful jumbled chaos. And while Marche’s story, into which we get a 360-degree view with his real-life partner’s annotations, is personal to him, I was nodding along in agreement and LOL’d at lines like ‘Eat, Pray, Love . . . and Chores.’ It's an important look at the challenges of ‘having it all’ and positions the problem as not uniquely a woman’s issue, but a human one.” —Kirstine Stewart, author of Our Turn

“Stephen Marche is a very brave man: in The Unmade Bed he makes the case that relations between men and women have never been better. Because he is also a very brilliant writer, he pulls it off. A thrilling read, no less because his wife has provided footnotes.” —Ian Brown, author of Sixty
or
Not Currently Available for Direct Purchase
Copyright © 2020 American Booksellers Association