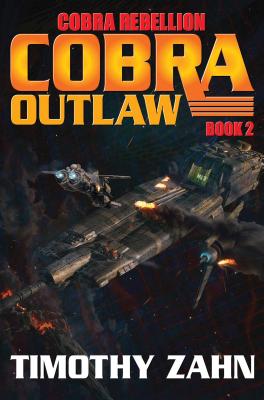 ORIGINAL TRADE PAPERBACK. SEQUEL TO COBRA SLAVE. New York Times #1 best-selling author Timothy Zahn continues his Cobra SF adventure series with book #2 of a new Cobra saga, Cobra Rebellion. Cobra warriors: technologically enhanced and implanted with an arsenal of covert weaponry fight against alien foes and evil humans. Cobra warriors: technologically enhanced human warriors designed to combat an implacable alien menace. Now, and not for the first time, the Cobras are facing trouble from their own kind. The Broom clan of Cobra warriors finds itself pressed between two star empires headed for war. On the planet Aventine, the Broom's homeworld, pater familia Paul Broom has been taken prisoner by Commodore Santeros, an implacable operative of the Dominion of Man. Paul is due to have his memories sifted through by the dreaded and often destructive Dominion MindsEye in order to root out the location of legendary Qasamaa planet where huge advances in military hardware, particularly a svelte powered armor, might give the Dominion of Man an edge in a coming war with the alien Troft. Santeros hopes to strike a deal with Qasama and, if a deal cannot be struck, then Santores and the Dominion are prepared to take what they want. Elsewhere on Aventine and in the galaxy beyond, rebellion is brewing against Dominion atrocities and Dominion scheming, with outlaw Cobra warriors Lorne and Jody Broom in the vanguard. Meanwhile, Cobra Jason Broom poses as an escaped slave on a secret Troft prison planet where humans are sent to gladiatorial combat to the death for Troft amusement and wagering. He is seeking information on Troft factions, for not every Troft wants war with humankind, and if he can identify moderate elements, he may save the Cobra worlds, and head off a massive interstellar war in the bargain. The stage is set for adventure with one family of Cobra heroes once again fighting for freedom and peace in a galaxy on the edge of war. About Timothy Zahn:
"Zahn keeps the story moving at a breakneck pace, maintaining excitement."--Publishers Weekly

Y]ou can count on Timothy Zahn for three things: clean, sparse prose; good pacing; and great action scenes. The first book in the Cobra War series hits all those marks in admirable style and makes for a quick, entertaining sci-fi novel. --Blogcritics " Conqueror's Heritage] is another finely wrought space adventure . . . with] social, political and emotional complications, all of which Zahn treats with his usual skill."--Booklist "Zahn paints every detail in Angelmass] with gleamy realism . . . scientific dialogue that streams with starship hardware and military trooper talk . . . immensely appealing."--Kirkus Review

Timothy Zahn is a Hugo award winner, and author of the #1 New York Times best seller Heir to the Empire. Born in Chicago, Zahn earned a B.S. in physics from Michigan State University and an M.S. in physics from the University of Illinois. He sold his first story to Analog magazine in 1978, and immediately attracted attention as a new writer of science fiction based on real, cutting-edge science. Other Zahn creations include the Conqueror and Dragonback series. His books for Baen include his popular Cobra SF adventure series. Zahn is also the coauthor, with David Weber, of new Honor Harrington universe series Manticore Ascendant, with first entry A Call to Duty, out in October 2014. The Timothy Zahn author page on Facebook has received over 50,000 likes and can be visited at http: //www.facebook.com/TimothyZahn.
Loading...
or support indie stores by buying on