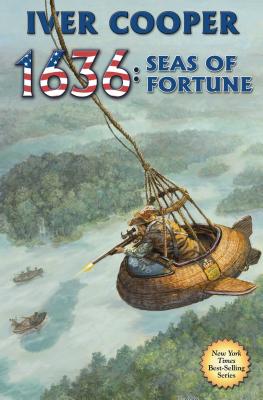 National Best Seller in Trade Paperback. A new addition to the multiple New York Times best-selling Ring of Fire series. After carving a place for itself in war-torn 17th century Europe, citizens of the modern town of Grantville, West Virginia, the up-timers and their allies take on continental America and the Japan A cosmic catastrophe, the Ring of Fire, strands the West Virginia town of Grantville in the middle of Europe during the Thirty Years War. The repercussions of that event transform Europe and, in a few years, begin spreading across the world. By 1636, the Ring of Fire's impact is felt across two great oceans, the Atlantic and Pacific. Stretching Out The United States of Europe seeks out resources -- oil, rubber and even aluminum ore -- to help it wage war against the foes of freedom. Daring pioneers cross the Atlantic and found a new colony on the wild coast of South America. The colonists hope that with the up-timers' support and knowledge they can prosper in the tropics without resort to Indian and African slavery. Then a slave ship visits the colony, seeking water.... and the colonists must make a fateful choice. Rising Sun In 1633, the wave of change emanating from the Ring of Fire reaches Japan. The Shogun is intrigued by samples of up-time technology, but it's a peek at what fate had in store for Japan in the old time line that has the greatest impact -- setting events in motion whose tremors are felt thousands of miles away and for years to come, as Japan pulls back from a policy of isolation and stakes out its own claim in the brave new world created by the Ring. About 1636: Seas of Fortune
..". expand s] the Ring of Fire universe into new or previously limited geography and culture. "Stretching Out" includes seven excellent entries mostly in South America and the Caribbean built on real events but with a nice Grantville twist. "Rising Sun" contains five terrific tales ... also built on real events enhanced by historical speculation but with a nice Grantville twist."--Alternate Worlds About Eric Flint's Ring of Fire series:
"This alternate history series is...a landmark..."--Booklist " Eric] Flint's 1632 universe seems to be inspiring a whole new crop of gifted alternate historians."--Booklist ..".reads like a technothriller set in the age of the Medicis..."--Publishers Weekly

Iver Cooper has been an active contributor to Eric Flint's Ring of Fire universe, with 22 short stories and 40 articles published so far in the online Grantville Gazette, and another short story in the hardcover anthology Ring of Fire II. Cooper is an intellectual property law attorney with Browdy & Neimark, Washington DC. He has received legal writing awards from the American Patent Law Association, the U.S. Trademark Association, and the American Society of Composers, Authors and Publishers, and is the sole author of Biotechnology and the Law, now in its twenty-somethingth edition. In his spare time, he teaches swing and folk dancing, and participates in local photo club competitions. Cooper is married with a son and daughter.
Loading...
or
Not Currently Available for Direct Purchase