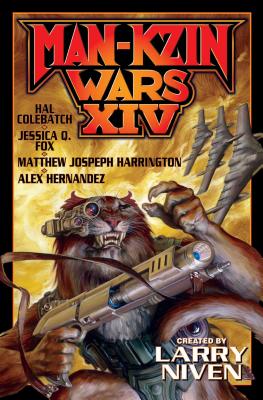 The perennially best-selling series set in Larry Niven’s Man-Kzin universe continues with entry #14 including hard-hitting and thought-inducing tales from a host of talented contributors Hal Colebatch, Matthew Joseph Harrington, Alex Hernandez, Jessica Q. Fox, and more. The catlike alien Kzin, formerly invincible conquerors of all they encountered, must learn to compromise with humans if they wish to survive and prosper once again as a species.

Larry Niven (left) is the Hugo and Nebula Award-winning author of such classics as Ringworld, The Integral Trees, and Destiny's Road. He has also collaborated with both Jerry Pournelle and Steven Barnes on The Legacy of Heorot, Beowulf's Children, and the bestselling Dream Park series. He lives in Chatsworth, California.
Larry Niven and Jerry Pournelle were the joint winners of the 2005 Robert A. Heinlein Award.
Loading...
or
Not Currently Available for Direct Purchase