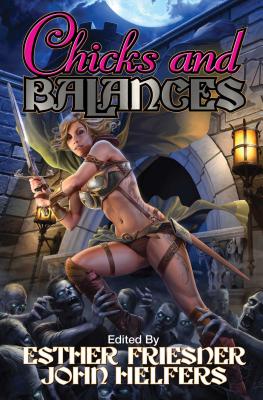 Chicks and Balances, 7 (Chicks in Chainmail #7)

ORIGINAL ANTHOLOGY featuring rollicking, tongue-in-cheek tales of women warrior fighting against the stodgy and in the name of freedom of expression, Chicks in Chainmail style Continuing a great tradition, Chicks and Balances is not what you might think (or it is what you think, depending on which way your mind runs). What we have here is a bunch of perfectly healthy women who happen to be of the brass-bra-wearing and chain-link bikinis sort. Each is fighting in her own way for the freedom to express herself--often by thrusting sword through a censor's black heart Be glad, the chicks in chainmail are back, and they will not be oppressed, repressed, or depressed All new adventures of fearless women warriors by Nebula-winning author Harry Turtledove; Jody Lynn Nye, co-author of the national best seller The Ship Who Won; Campbell Award-winner Wen Spencer, and many more, including the inimitable Esther Friesner herself, as fantasy adventure takes a turn for the lighter side. Contributors:
Esther Friesner
Jody Lynn Nye
Jim C. Hines
Elizabeth A. Vaughan
Harry Turtledove
Kerrie L. Hughes
Steven Harper Piziks
Wen Spencer
Julie S. Mandala
Esther Friesner
Jean Rabe
Alex Shvartsman
Sarah A. Hoyt
Robin Wayne Bailey
Laura Resnick
Lee Martindale
P.C. Hodgell
Dean Wesley Smith
Laura Frankos
Louisa Swann
Elizabeth Ann Scarborough
Kristine Kathryn Rusch The Series:
Chicks in Chainmail
Turn the Other Chick
The Chick's in the Mail
Chicks 'n Chained Males
Chicks Ahoy
Did You Say Chicks?
Chicks and Balances

Esther Friesner is a winner twice over of the Nebula Award (for the Year's Best Short Story, 1995 and 1996), and is the author of twenty-nine novels and more than one hundred short stories. She has also edited six anthologies, including the popular Chicks in Chainmail series for Baen. Her works have been published in the UK, Japan, Germany, Russia, France, and Italy. She lives in Connecticut.
Loading...
or support indie stores by buying on