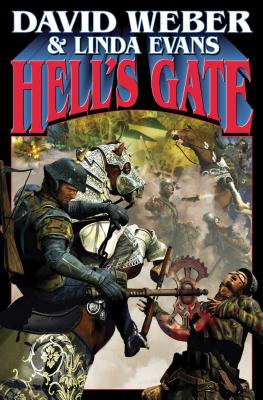 They Thought They Knew How The Universes Worked—THEY WERE WRONG

In the almost two centuries since the discovery of the first inter-universal portal, Arcana has explored scores of other worlds . . . all of them duplicates of their own. Multiple Earths, virgin planets with a twist, because the ''explorers'' already know where to find all of their vast, untapped natural resources. Worlds beyond worlds, effectively infinite living space and mineral wealth.

And in all that time, they have never encountered another intelligent species. No cities, no vast empires, no civilizations and no equivalent of their own dragons, gryphons, spells, and wizards.

But all of that is about to change. It seems there is intelligent life elsewhere in the multiverse. Other human intelligent life, with terrifying new weapons and powers of the mind . . . and wizards who go by the strange title of ''scientist.''

About Hell's Gate:
"Magic and high tech collide in this exciting military SF novel from bestseller Weber . . . The authors treat both societies sympathetically and realistically, with human vices and virtues evenly distributed."—Publishers Weekly