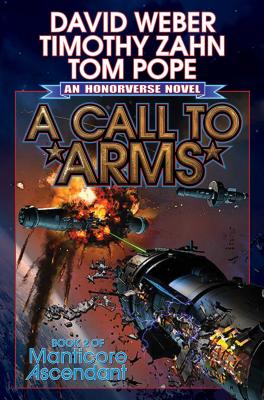 A Call to Arms (Manticore Ascendant #2)

The bad news is that two of the best ways of making enemies ever invented are insisting on enforcing the rules . . . and thinking outside them when other people don’t. Travis learned that lesson the hard way as a young volunteer in basic training, and he knows that if he could just keep his head down, turn a blind eye to violations of the rules, and avoid stepping on senior officers’ toes, he’d do just fine. But the one rule Travis Long absolutely can’t break is the one that says an officer in the Royal Navy does his duty, whatever the consequences.

About A Call to Arms:
"The plotting is as solid as ever, with smaller scenes building to an explosive, action-packed crescendo, and the authors strike a nice balance between technical details of space flight and the human cost of war."—Publishers Weekly

Praise for prequel A Call to Duty:
"This exciting book marks the first collaboration of two powerhouses . . . fans of both writers should be quite pleased with the result. Like Robert A. Heinlein and Orson Scott Card, Weber and Zahn are telling a story about a teenage character but writing for readers of all ages."–Booklist

Thomas Pope is a founder of BuNine, a collection of professionals assisting David Weber in defining and documenting the Honorverse. Tom served as lead editor for House of Steel and is collaborating with David Weber and Timothy Zahn on a new series set in the early days of the Manticoran Navy. He lives in Pittsburgh with his wife, two children, and a constantly growing menagerie of pets.
Loading...
or
Not Currently Available for Direct Purchase