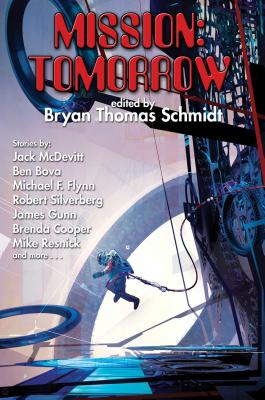 NEW STORIES OF THE FUTURE OF SPACE EXPLORATION. Original anthology of stories about near-future space exploration from top authors. Includes stories by Jack McDevitt, Michael F. Flynn, Sarah A. Hoyt, Ben Bova, Mike Resnick, and many more. In Mission: Tomorrow, science fiction writers imagine the future of space exploration with NASA no longer dominant. Will private companies rule the stars or will new governments take up the call? From Brazilians to Russians to Chinese, the characters in these stories deal with everything from strange encounters, to troubled satellites and space ships, to competition for funding and getting there first. Nineteen stories of what-if spanning the gamut from Mercury to Pluto and beyond, assembled by critically praised editor Bryan Thomas Schmidt. With stories by: Jack McDevitt
Alex Shvartsman
Lezli Robyn
Robert Silverberg
Michael F. Flynn
Brenda Cooper
Michael Capobianco
Sarah A. Hoyt
Mike Resnick
David D. Levine
James Gunn
and more About Mission: Tomorrow
"Editor Schmidt adds grandmasters to a mix of newer established names and balances the tragic with the humorous."--Publishers Weekly " A] book like this serves to keep alive the broader dreams that were so instrumental in the foundation of our genre."--Locus "This themed anthology . . . will appeal to a wide range of readers, who will appreciate the diversity of stories . . . a solid introduction to a classic genre."--Kirkus About Shattered Shields, edited by Jennifer Brozek and Bryan Thomas Schmidt:
"In this well-built anthology, seventeen original stories cut to the heart of military fantasy, diving directly into the most exciting moments of dramatic bravery, grand battles, and life-changing heroism. . . . Readers who prefer to cut straight to the action, but want more depth than pure hack-and-slash, will find these offerings appealing."--Publishers Weekly "An inventive and thought-provoking set of tales that capture the bravery and terrors of battle. Carries the banner of military fantasy proudly."--John Marco, author of The Bronze Knight Series About The Raygun Chronicles edited by Bryan Thomas Schmidt:
"Fans of sf should enjoy this stylistically varied homage to a genre as old as the fiction . . . "--Library Journal About Beyond the Sun edited by Bryan Thomas Schmidt:
"Beyond the Sun mixes courage, redemption, and stark terror in tales of distant worlds. Buckle in."--Jack McDevitt, author of Firebird

Bryan Thomas Schmidt is an author and Hugo-nominated editor of adult and children's speculative fiction. His debut science fiction novel The Worker Prince, received Honorable Mention on Barnes & Noble's Year's Best SF of 2011, and was followed by sequels The Returning and The Exodus. His childrens' books include 102 More Hilarious Dinosaur Jokes For Kids and Abraham Lincoln: Dinosaur Hunter--Land Of Legends. Schmidt has edited anthologies Space Battles: Full Throttle Space Tales #6, Beyond The Sun, Raygun Chronicles: Space Opera For a New Age, Mission: Tomorrow and, with Jennifer Brozek, coedited military high fantasy original anthology, Shattered Shields. Schmidt hosted #sffwrtcht (Science Fiction & Fantasy Writer's Chat) Wednesdays at nine p.m. ET on Twitter from December 2010 through early 2015. A book editor for WordFire Press, he has also edited freelance for clients including New York Times Bestsellers Angie Fox and Andy Weir, for whom he was the first editor on the hit novel, The Martian. He can be found at his website at www.bryanthomasschmidt.net.
Loading...
or
Not Currently Available for Direct Purchase