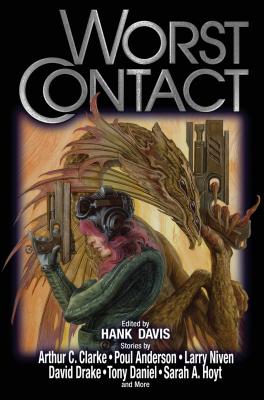 STORIES OF ALIEN CONTACT GONE WRONG. Will it be, "Greeting, fellow Sentients" or, "Nice Planet—we'll take it”? These stories from SF greats answer the question, "Are we alone in the universe?" with a resounding, "No, but we wish we were!"

When the first contact between humans and aliens from another planet happens, will they say, “Take me to your leader,” or is “Surrender, puny primitive bipeds” more likely? Or maybe, “Hello there, I’m selling the latest edition of the Galactic Encyclopedia, and no planet should be without a set,” might be the first words from the alien visitor.

Ever since H.G. Wells wrote The War of the Worlds, science fiction writers have speculated on what the first contact might be like. From attacking invaders to wise and benevolent visitors who are ready to solve all our problems for us, from horror stories to hilarious satire, with all the stops in between, including plenty of tales in which the aliens are the ones who wish they’d stayed at home and never come across Earth and its inhabitants.

With stories by such science fiction masters as Poul Anderson, David Drake, William Tenn, Sarah A. Hoyt, Tony Daniel, and more, this is a collection filled with chills, thrills, and laughter, all reporting on what happens when First Contact turns into Worst Contact.

A Cosmic Christmas 2 You: “This creative and sprightly Christmas science fiction anthology spins in some surprising directions . . . A satisfying read for cold winter evenings, this anthology is a great stocking stuffer for SF fans.”—Publishers Weekly

In Space No One Can Hear You Scream: “From Arthur C. Clarke's interplanetary riff on the lonely night's walk ("A Walk in the Dark") to George R.R. Martin's award-winning classic of irresponsible alien pet ownership ("Sandkings"), the 13 tales in this collection blend sf with horror to demonstrate the resiliency of both genres. VERDICT: Including selections by Clark Ashton Smith, Robert Sheckley, Elizabeth Bear, Sarah Monette, and other stars, this seasonal collection offers strong tales by the genre's best storytellers.” —Library Journal

Hank Davis (b. 1944) is originally from Kentucky, wasted far too much time in New York, and has been a sometimes-spectral presence at Baen Books for over three decades. He has never quite shaken off the life-changing event of reading A. E. van Vogt’s Slan while in the second grade, leading to his reading every bit of sf he could get his hands on during his portion of the twentieth century, along with watching a lot of TV shows and movies, many of them pretty bad. However, the twenty-first century has mostly been disappointing (even with better movies and TV shows). For example, he sold a story to Harlan Ellison in 1969, shortly before being shipped off to Vietnam to help the 101st Airborne Division lose the war, under LBJ’s ineptitude, and recently learned, over half a century later, that it will not be published in The Last Dangerous Visions. More successfully, he has had stories published in the magazines If, Analog, The Magazine of Fantasy & Science Fiction, and Bluegrass Woman, as well as Orbit 11, and a few other original anthologies (but not in TLDV).  He is currently vegetating in North Carolina, and, as an advanced glaucoma case, listens to e-texts and wishes that even if the disappointing twenty-first century doesn’t have flying cars, it could at the very least have brought forth cars that drive themselves by now.
Loading...
or
Not Currently Available for Direct Purchase