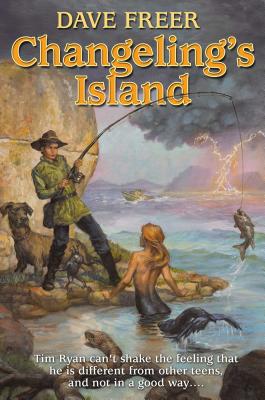 Teenager Tim Ryan comes into his own as he faces danger on a remote Australia island where magic lurks in land and sea. Dragon Award Nominee for Best Young Adult Novel and for Best Fantasy Novel Tim Ryan can't shake the feeling that he is different from other teens, and not in a good way. For one thing, he seems to have his own personal poltergeist that causes fires and sets him up to be arrested for shoplifting. As a result Tim has been sent to live on a rundown farm on a remote island off the coast of Australia with his crazy grandmother, a woman who seems to talk to the local spirits, and who refuses to cushion Tim from facing his difficulties. To make matters worse, Tim is expected to milk cows, chase sheep, and hunt fish with a spear. But he's been exiled to an island alive with ancient magic--land magic that Tim can feel in his bones, and sea magic that runs in his blood. If Tim can face down the danger from drug-runners, sea storms, and the deadly threat of a seal woman who wishes to steal him away for a lingering death in the land of Faery, he may be able to claim the mysterious changeling heritage that is his birthright, and take hold of a legacy of power beyond any he has ever imagined. About Changeling's Island:
"' Tim] finds the islanders accept him . . .with real friendships. He needs these connections because he soon discovers himself entangled in a centuries-old family feud with a selkie, seeking something Tim inherited from his Irish ancestors. . . . . Changeling's Island is a delightful book."--Daily News of Galveston County About Dave Freer:
"Dave Freer always delivers compelling, fast-moving and addictive fantasy adventures."-Garth Nix, New York Times best-selling author of The Keys to the Kingdom series "Dave Freer's stories are always well-plotted, fast-paced and--most of all--a lot of fun to read."--Eric Flint, New York Times best-selling creator of the Ring of Fire series About A Mankind Witch, by Dave Freer:
"Good characterization, ripsnorting action and an ingenious plot make this a feast. . ."
--Publishers Weekly (Starred Review)

Dave Freer is an ichthyologist turned author who lives on Flinders Island (between mainland Australia and Tasmania) with his wife, four dogs and four cats, and two sons. He has coauthored a range of novels with Eric Flint (Rats, Bats and Vats, The Rats, the Bats and the Ugly, Pyramid Scheme, Pyramid Power, and Slow Train to Arcturus), with Mercedes Lackey and Eric Flint (The Shadow of the Lion, This Rough Magic, The Wizard of Karres, Much Fall of Blood, Burdens of the Dead, and Freer's solo entry in the series, A Mankind Witch) as well as writing the Dragon's Ring fantasy novels Dragon's Ring and Dog and Dragon.
or
Not Currently Available for Direct Purchase
Copyright © 2020 American Booksellers Association