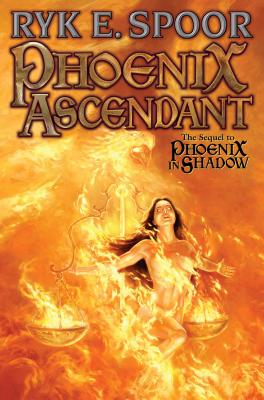 ORIGINAL TRADE PAPERBACK #3 in the Balanced Sword epic fantasy series, and series finale. Phoenix and her companions take on the King of All Hells in a final showdown with the fate of multiple worlds in the balance. The King of All Hells Awaits Kyri, Tobimar, and Poplock had managed--barely--to thwart the plans of the mad alchemist-mage Master Wieran, and defeat the monstrous Elderwyrm Sanamaveridion, saving the secret country of Kaizatenzei from the evil hidden at its core. Now they believe they have discovered the true architect of not just the fall of the Justiciars of Myrionar--god of Justice and Vengeance--but the unleashing of the forces of the Hells themselves against the other countries of Zarathan. They begin their journey back to Kyri's home, Evanwyl, to confront the being their new ally Miri calls Viedraverion, first son of the King of All Hells. But behind that name lies an even more terrible secret, and a plan centuries in the making, a plan that depends on Kyri being who and what she is. Even if the three adventurers can escape the spies and traps within their own adventuring party, their final adversary awaits them eagerly. For with them they carry the key to their enemy's victory--a victory which will destroy not only Kyri, her friends, and her country, but also the gods themselves Yet Kyri and her allies have a hidden strength themselves. They are fighting for the right, and there are ancient gods and powers who may come to the aid of a true warrior's heart in the time of greatest need. About Ryk E. Spoor's Phoenix Rising
"A winner Great characters, and thrilling adventure. I want more "--Ed Greenwood, best-selling author of the Forgotten Realms series " E]xciting adventure, scary monsters, strange gods, and wondrous magic."--Lawrence Watt-Evans About Spheres of Influence
"Fast and entertaining action and a world that has the feel of Asimov's Foundation series."--Sarah A. Hoyt, author of the Darkship saga About Ryk E. Spoor's Grand Central Arena
..".an imaginative piece of space opera that's set on a near-future Earth where artificial intelligence is taken for granted."--Shiny Reviews "Grand Central Arena' is space opera in the grand old tradition . . . but with modern sensibilities and awareness of current speculations in cutting edge physics."--Fantasy Book Critic About the Threshold Series by Ryk E. Spoor and Eric Flint
." . . fast-paced sci-fi. . . light in tone and hard on science . . ." --Publishers Weekly ." . . the series is filled with] linguistics, biology, physics, and evolution further the story, as well as wacky humor, academic rivalries, and even some sweet romances." --School Library Journal The Balanced Sword Series
Phoenix Rising
Phoenix in Shadow
Phoenix Ascendant

Ryk E. Spoor, while earning his masters degree in Pittsburgh, became a playtesting consultant and writer for the Wizards of the Coast, the leading publisher of role-playing games and related novels. He now lives in East Greenbush, NY, working as a technical proposal writer for a high-tech R&D firm, and spending his non-writer time with his wife and sons. Spoor is the coauthor with New York Times best seller Eric Flint, of the popular Threshold series of science fiction novels. Spoor's solo novels for Baen include Paradigms Lost, Grand Central Arena, and Spheres of Influence. He is also the author of epic fantasy Phoenix Rising.
or
Not Currently Available for Direct Purchase
Copyright © 2020 American Booksellers Association