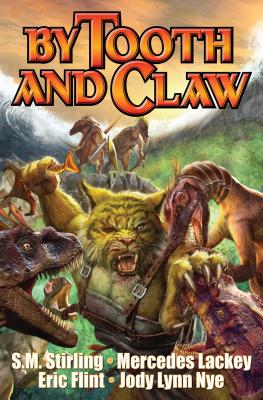 New York Times best-selling authors S.M. Stirling, Mercedes Lackey, Eric Flint, and Jody Lynn Nye return with four novellas. The cat-like Mrem, our heroes, battle the deep reptilian intelligence of humanoid dinosaurs in a Bronze Age world. SEQUEL TO EXILED: CLAN OF THE CLAW. Second entry in a series with four linked novellas from multiple best-sellers S.M. Stirling, Mercedes Lackey, Eric Flint and Jody Lynn Nye After the extinction asteroid does not strike Earth, the dinosaurs keep evolving-but so do the mammals. We mammals have achieved humanlike shapes, but now it's cold-blooded, magic-using reptiles against the hot-blooded, hot-tempered descendants of cats. In a heroic, Bronze Age world similar to 300, the Mrem Clans expand their rough-and-tumble territory, but now they face the Lishkash, reptilian masters of a cold-blooded empire of slave armies and magic. It's mammalian courage and adaptation against reptile cunning in a clash of steel and will that determine who shall inherit the Earth. The Change Series
Exiled: Clan of the Claw
By Tooth and Claw