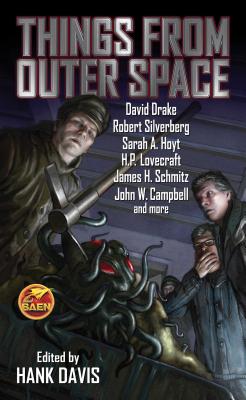 ORIGINAL MASS MARKET. STORIES OF THINGS FROM SPACE. Mostly very, very bad things that want to harm humans and destroy Earth. Or take it for their own. Original stories and reprints of classics from the scary side of science fiction THE THINGS ARE COMING . . . As we all know, in space, no one can hear you scream. Which doesn't mean that anyone is safe just because they're standing on the soil of planet Earth, because if a thing from out there drops in, screaming probably won't save you. Earth has spawned myriad unpleasant life forms which are bad news for humans, ranging in size from the Ebola virus to the great white shark up to the Tyrannosaurus Rex (extinct, fortunately for us)--and that's just one planet. What even more deadly life forms might the billions of planets in our galaxy have spawned? And suppose the things are intelligent and capable of crossing space and coming here . . . Considering that very possibility are the masters of science fiction starring in this book, including Robert Silverberg, David Drake, Sarah A. Hoyt, James H. Schmitz, Fritz Leiber, Robert Sheckley, Murray Leinster and John W. Campbell, as well as classic stories of extraterrestrial horrors by H.P. Lovecraft, George Allan England and more. E.T. might have been happy eating Reese's Pieces, but other visitors from the void might have less dainty appetites. And there are probably worse things than merely being eaten . . . Praise for previous anthologies edited by Hank Davis: In Space No One Can Hear You Scream
." . . the 13 tales in this collection blend SF with horror to demonstrate the resiliency of both genres. . . . offers strong tales by the genre's best storytellers."--Library Journal ." . . first-rate science fiction, demonstrating how short stories can still entertain."--Galveston County Daily News A Cosmic Christmas 2 You:
"This creative and sprightly Christmas science fiction anthology spins in some surprising directions. . . . A satisfying read for cold winter evenings . . . a great stocking stuffer for SF fans."--Publishers Weekly As Time Goes By:
"As Time Goes By . . . does an excellent job of exploring not only romance through time travel--relationships enabled or imperiled by voyaging through time--but the intrinsic romance of time travel itself. . . . The range of styles and approaches is as wide as the authors' sensibilities and periods might suggest . . . full of entertaining and poignant stories . . ."--Alvaro Zinos-Amaro, IntergalacticMedicineShow.com.

Hank Davis is Senior Editor at Baen Books. He served in Vietnam in the Army and has had stories in Analog Science Fiction, The Magazine of Fantasy and Science Fiction, and anthologies If and Orbit, as well as Harlan Ellison's The Last Dangerous Visions.
or
Not Currently Available for Direct Purchase
Copyright © 2020 American Booksellers Association