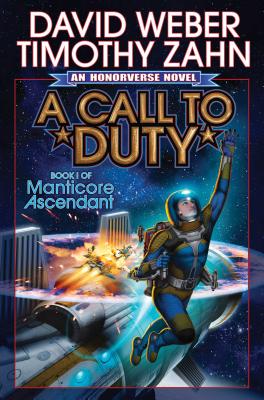 Growing up Travis Uriah Long yearned for order and discipline in his life—the two things his neglectful mother couldn’t or wouldn’t provide. So when Travis enlisted in the Royal Manticoran Navy, he thought he’d finally found the structure he’d always wanted so desperately.

But life in the RMN isn’t exactly what he expected. Boot camp is rough and frustrating; his first ship assignment lax and disorderly; and with the Star Kingdom of Manticore still recovering from a devastating plague, the Navy is on the edge of budgetary extinction.

But those factions are mistaken. Events are in motion that will prove that the universe is not a safe place. Manticore may not be as isolated as everyone thinks, and Travis Long is about to find that out.

About A Call to Duty:
“This exciting book marks the first collaboration of two powerhouses . . . fans of both writers should be quite pleased with the result. Like Robert A. Heinlein and Orson Scott Card, Weber and Zahn are telling a story about a teenage character but writing for readers of all ages.”—Booklist

“VERDICT: The 'Honor Harrington' books . . . get some backstory in this new series set in the early years of the Star Kingdom . . . [which] features the action and military details for which the 'Honor' titles have long been known. Fans will want to get in on the ground floor of this series of prequels."—Library Journal

About the Honor Harrington series:
“Weber combines realistic, engaging characters with intelligent technological projection and a deep understanding of military bureaucracy in this long-awaited Honor Harrington novel…Fans of this venerable space opera will rejoice to see Honor back in action.”—Publishers Weekly

“. . .everything you could want in a heroine …. Excellent … plenty of action.”—Science Fiction Age

Timothy Zahn is a Hugo Award winner and the author of the New York Times #1 bestseller Heir to the Empire, as well as the best-selling Star Wars: Thrawn series of novels. Born in Chicago, he earned a B.S. in physics from Michigan State University and an M.S. in physics from the University of Illinois. He sold his first story to Analog in 1978, and immediately attracted attention as a new writer of science fiction based on real, cutting-edge science. Baen published his popular Cobra trilogy in one volume. His other popular series include the Conqueror and Dragonback novels. With David Weber and Thomas Pope, he is the author of novels A Call to Arms and A Call to Vengeance. Zahn has written more than fifty novels, including the recent Cobra Rebellion series entries Cobra Outlaw and Cobra Traitor.