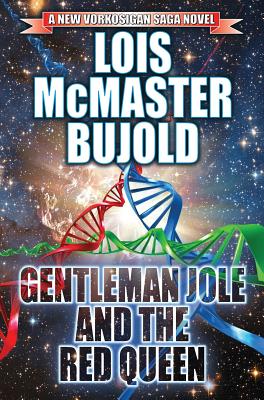 A NEW NOVEL IN THE AWARD WINNING VORKOSIGAN SAGA. A New York Times bestseller in hardcover.  Cordelia Naismith Vorkosigan returns to the planet that changed her destiny.

Three years after her famous husband’s death, Cordelia Vorkosigan, widowed Vicereine of Sergyar, stands ready to spin her life in a new direction. Oliver Jole, Admiral of the Sergyar Fleet, finds himself caught up in her web of plans in ways he’d never imagined, bringing him to an unexpected crossroads in his career.

Meanwhile, Miles Vorkosigan, one of Emperor Gregor’s key investigators, this time dispatches himself on a mission of inquiry, into a mystery he never anticipated—his own mother.

Plans, wills, and expectations collide in this sparkling science fiction social comedy, as the impact of galactic technology on the range of the possible changes all the old rules, and Miles learns that not only is the future not what he expects, neither is the past.

About Lois McMaster Bujold’s Vorkosigan Saga:
“Fans have been clamoring for Hugo-winner Bujold to pen a new Vorkosigan Saga novel . . . her deft and absorbing writing easily corrals the complex plot.”—Publishers Weekly on Cryoburn

“. . . an intelligent, well-crafted and thoroughly satisfying blend of adventure, sociopolitical commentary, scientific experiments, and occasional perils . . . with that extra spicing of romance. . . .”—Locus

About Vorkosigan series entry Captain Vorpatril's Alliance:
“. . . this may be one of the most anticipated and long-awaited entries to Bujold’s acclaimed Vorkosigan saga. For years fans have clamored for Ivan Vorpatril’s story, and at last Bujold delivers something that will both thrill the devoted audience and entrance new readers . . . Longtime readers will love seeing a new side of Ivan as well as hearing his views on many of the series' characters. New readers can enjoy Ivan’s story on its own . . . Essential for all sf collections and a must-read for Bujold and Vorkosigan fans.”—Booklist

About Vorkosigan series entry Diplomatic Immunity:
“Bujold is adept at world-building and provides a witty, character-centered plot, full of exquisite grace notes . . . fans will be thoroughly gripped and likely to finish the book in a single sitting.”—Publishers Weekly

A science fiction and fantasy legend, Lois McMaster Bujold has won seven Hugo Awards and three Nebula Awards. Her Miles Vorkosigan saga is a massively popular science fiction mainstay. Her many New York Times bestsellers include previous series entries Cryoburn, Diplomatic Immunity, and Captain Vorpatril’s Alliance. In 2020, Ms. Bujold was named the 36th Damon Knight Grand Master by the Science Fiction and Fantasy Writers of America.
Loading...
or support indie stores by buying on
(This book is on backorder)