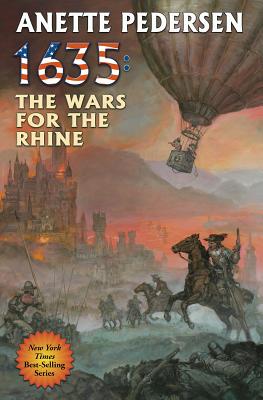 An exciting addition to the multiple New York Times best-selling Ring of Fire alternate history series created by Eric Flint. Time travelers from our modern age are thrown into the deadly straits of the Thirty Years War in Europe of the 1600s. In the year 1635, the Rhineland is in turmoil. The impact of the Ring of Fire, the cosmic accident which transported the small modern West Virginia town of Grantville to Europe in the early seventeenth century, has only aggravated a situation that was already chaotic. Perhaps nowhere in central Europe did the Thirty Years War produce so much upheaval as it did in the borderlands between France and Germany. Archbishop Ferdinand of Cologne shares the religious fanaticism of his older brother, Duke Maximilian of Bavaria. He is determined to restore the power of the Catholic Church over the middle Rhine, the so-called "Bishop's Alley," and has unleashed a plot for that purpose. But that same middle Rhine is territory which Landgrave William V of Hesse-Kassel is determined to seize for himself, under the guise of expanding the influence of the United States of Europe. Add to the witch's brew the deaths in battle of Duke Wolfgang of J lich-Berg and his son, which leaves his young widow Katharina Charlotte as the heir to those much-prized territories. She is now on the run, in disguise--and pregnant. Add the unexpected arrival of Austria's most capable general, Melchior von Hatzfeldt, along with the most ruthless spy and torturer in the Rhineland, Felix Gruyard. The wars for the Rhine have erupted, and only the devil knows how they will end. About Eric Flint's Ring of Fire series:
"This alternate history series is . . . a landmark . . ."--Booklist " Eric] Flint's 1632 universe seems to be inspiring a whole new crop of gifted alternate historians."--Booklist ." . . reads like a technothriller set in the age of the Medicis . . ."--Publishers Weekly

Anette Pedersen was born and raised in Denmark where she currently resides. She grew up reading science fiction in English and Danish due to her father's love for the genre. She has written multiple stories for anthologies edited by Eric Flint set in his Ring of Fire alternate history universe. Anette is a retired geologist and micropaleontologist. She is a church accountant and deacon, as well as a keen gardener and cook. She paints botanical illustrations to professional standards but, she claims, with far from professional speed.
or
Not Currently Available for Direct Purchase
Copyright © 2020 American Booksellers Association