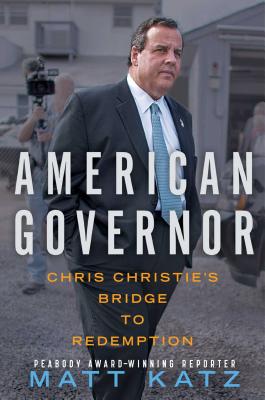 The ultimate insider to Chris Christie’s 2016 presidential campaign delivers a definitive biography of the popular and controversial governor of New Jersey—including the true story behind the Bridgegate lane-closure scandal.

Journalist Matt Katz has been covering Christie since 2011 and has seen firsthand how the governor appeals to the public through his tactics, rhetoric, and personality. In American Governor, Katz weaves a compelling on-the-ground political narrative that begins with the roots of his family’s journey to America and takes us through his upset victory over Governor Jon Corzine and then along the road to his announcement of his candidacy for the highest office in the country.

Packed with exclusive information, interviews, and anecdotes, American Governor illustrates how Christie evolved from an unpopular perennial candidate running for local office to the most watched Republican in the country, a populist with leadership skills, charm, and luck seemingly unparalleled by any other up-and-coming politician. Christie has proven himself a dynamic force of nature by emerging wounded but not unbowed after Bridgegate—a scandal that would have destroyed another politician’s rising star. A political biography by an inside source who’s been on the Chris Christie beat longer than any reporter in New Jersey, American Governor is a thrilling and absorbing look at the modern making of a man and a politician.

"[An] exhaustively-reported takedown...In every sense, Katz has written the book on Christie."
— The New York Daily News

Matt Katz has covered New Jersey governor Chris Christie for more than four years, first for The Philadelphia Inquirer, where he created The Christie Chronicles blog, and now for WNYC and New Jersey Public Radio, where he runs The Christie Tracker, tweets @mattkatz00, and appears weekly on WNYC’s Christie Tracker Podcast. In 2015, Matt and a team from WNYC won a Peabody Award for their coverage of Christie and the Bridgegate scandal. The series of stories was WNYC’s first Peabody for news coverage since 1944. Matt has written about Christie for The New Republic, The Washington Post, and POLITICO Magazine. Prior to moving to the State House in Trenton, he spent time in Afghanistan, writing a series on reconstruction efforts that won the Livingston Award for Young Journalists.