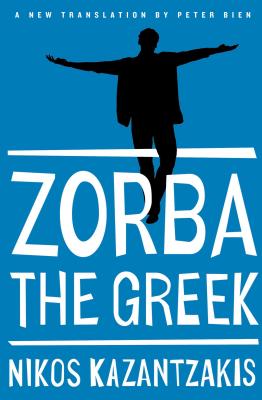 A stunning new translation of the classic book—and basis for the beloved Oscar-winning film—brings the clarity and beauty of Kazantzakis’s language and story alive.

First published in 1946, Zorba the Greek, is, on one hand, the story of a Greek working man named Zorba, a passionate lover of life, the unnamed narrator who he accompanies to Crete to work in a lignite mine, and the men and women of the town where they settle. On the other hand it is the story of God and man, The Devil and the Saints; the struggle of men to find their souls and purpose in life and it is about love, courage and faith.

Zorba has been acclaimed as one of the truly memorable creations of literature—a character created on a huge scale in the tradition of Falstaff and Sancho Panza. His years have not dimmed the gusto and amazement with which he responds to all life offers him, whether he is working in the mine, confronting mad monks in a mountain monastery, embellishing the tales of his life or making love to avoid sin. Zorba’s life is rich with all the joys and sorrows that living brings and his example awakens in the narrator an understanding of the true meaning of humanity. This is one of the greatest life-affirming novels of our time.

Part of the modern literary canon, Zorba the Greek, has achieved widespread international acclaim and recognition. This new edition translated, directly from Kazantzakis’s Greek original, is a more faithful rendition of his original language, ideas, and story, and presents Zorba as the author meant him to be.

Nikos Kazantzakis was born in Crete in 1883. He studied literature and art in Germany and Italy, philosophy under Henri Bergson in Paris and received his law degree from the University of Athens. The Greek Minster of Education in 1945, Kazantzakis was also a dramatist, translator, poet, and travel writer. Among his most famous works are, The Odyssey: A Modern Sequel, The Last Temptation of Christ, and Saviors of God.  He died in October 1957.
Loading...
or support indie stores by buying on