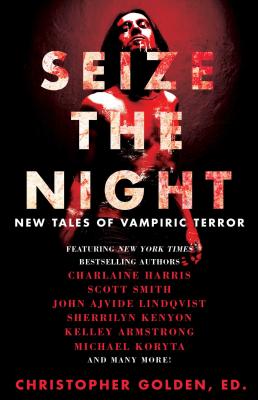 A blockbuster anthology of original, blood-curdling vampire fiction from New York Times bestselling and award-winning authors, including Charlaine Harris, whose novels were adapted into HBO’s hit show True Blood, and Scott Smith, publishing his first work since The Ruins.

Praise For Seize the Night: New Tales of Vampiric Terror…

"The notion of the romantic vampire is transcended to chilling and even heartbreaking effect in this stellar anthology of tales....These stories move smoothly from the subtle to the horrifying."
— Publishers Weekly (starred review)

Michael Koryta is the New York Times bestselling author of fourteen novels. His work has been translated into more than twenty languages and have won or been nominated for the Los Angeles Times Book Prize, Edgar Award, Shamus Award, Barry Award, Quill Award, International Thriller Writers Award, and the Golden Dagger. Visit him online at MichaelKoryta.com.

Tim Lebbon is the author of over fourteen novels and novella collections, and his short fiction has appeared in over fifteen anthologies, including The Year's Best Fantasy and Horror and The Mammoth Book of Best New Horror. He is a winner and multiple nominee of the British Fantasy Award and has been nominated for the World Fantasy Award and the International Horror Guild Award.

Scott Smith was educated at Dartmouth College and Columbia University. He lives in New York City.
Loading...
or support indie stores by buying on