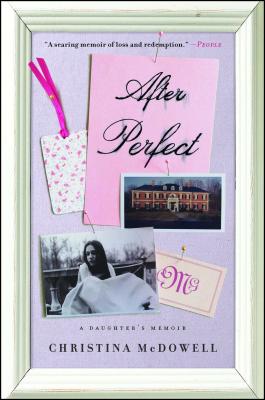 A “searing memoir of loss and redemption” (People) that “exposes the side of The Wolf of Wall Street we didn’t get to see” (Metro), After Perfect is a cautionary tale about one family’s destruction in the wake of the Wall Street implosion.

Selected as one of the year’s “Fifteen Books You Need to Read” by the Village Voice, Christina McDowell’s unflinching memoir is “a tale of the American Dream upended.” Growing up in an affluent Washington, DC, suburb, Christina and her sisters were surrounded by the elite: summering on Nantucket Island, speeding down Capitol Hill’s rich back roads, flying in their father’s private plane. Their life of luxury was brutally stripped away after the FBI arrested Tom Prousalis on fraud charges. When he took a plea deal as he faced the notorious Wolf of Wall Street Jordan Belfort’s testifying against him, the cars, homes, jewelry, clothes, and friends that defined the family disappeared before their eyes, including the one thing they could never get back: each other.

Christina writes with candid clarity about the dark years that followed and the devastation her father’s crimes wrought upon her family: the debt accumulated under her identity; her mother’s breakdown; her own spiral into addiction and promiscuity; and the delusion that enveloped them all. She shines a remarkable, uncomfortable light on a family’s disintegration and takes a searing look at a controversial financial time and also at herself, a child whose “normal” belonged only to the one percent. A rare, insider’s perspective on the collateral damage of a fall from grace, After Perfect is a poignant reflection on the astounding pace at which a life can change and how blind we can be to the ugly truth.

Praise For After Perfect: A Daughter's Memoir…

"[Christina McDowell] exposes the side of ‘Wolf of Wall Street’ we didn’t get to see."
— Metro US

"In her gritty, heart-wrenching memoir, After Perfect, she describes her long journey through depression, addiction, grief, and anger as she reeled from her father’s unimaginable betrayal—and how she ultimately found forgiveness."
— Parade.com

"McDowell traces how her privileged family lost everything...and that was only the beginning of her nosedive."
— O Magazine

"Christina McDowell opens up about her Wolf of Wall Street life."
— MarieClaire.com

“[Christina McDowell] reflects on how facing up to loss can lead to new beginnings.”
— Porter Magazine

"[Christina McDowell] has written a memoir about the fallout from her father's crimes, a tale of the American Dream upended."
— The Village Voice, Fifteen Books You Need to Read in 2015

"A searing memoir of loss and redemption."
— People Magazine

"After Perfect tells the expanded tale of her personal hell...Throughout her book, McDowell retains an awareness of the sense of entitlement wrought by her upbringing and her ongoing privilege."
— LA Weekly

"Without sensationalizing her lifestyle...McDowell faces her past with an admirably rigorous level of criticism and self-awareness."
— Shelf Awareness

Christina McDowell is the author of the critically acclaimed book, After Perfect: A Daughter’s Memoir, as well as the author of Cave Dwellers. Her work has appeared in The Washington Post; The New York Times; Los Angeles Times; HuffPost; The Guardian; O, The Oprah Magazine; People; LA Weekly; Marie Claire; USA TODAY; and The Village Voice, among others. Born and raised in Washington, DC, Christina is an advocate for restorative justice and criminal justice reform. She lives in Washington, DC.
Loading...
or support indie stores by buying on