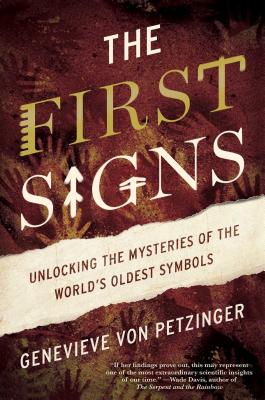 Unlocking the Mysteries of the World's Oldest Symbols

One of the most significant works on our evolutionary ancestry since Richard Leakey’s paradigm-shattering Origins, The First Signs is the first-ever exploration of the little-known geometric images that accompany most cave art around the world—the first indications of symbolic meaning, intelligence, and language.

Imagine yourself as a caveman or woman. The place: Europe. The time: 25,000 years ago, the last Ice Age. In reality, you live in an open-air tent or a bone hut. But you also belong to a rich culture that creates art. In and around your cave paintings are handprints and dots, x’s and triangles, parallel lines and spirals. Your people know what they mean. You also use them on tools and jewelry. And then you vanish—and with you, their meanings.

Join renowned archaeologist Genevieve von Petzinger on an Indiana Jones-worthy adventure from the open-air rock art sites of northern Portugal to the dark depths of a remote cave in Spain that can only be reached by sliding face-first through the mud. Von Petzinger looks past the beautiful horses, powerful bison, graceful ibex, and faceless humans in the ancient paintings. Instead, she’s obsessed with the abstract geometric images that accompany them, the terse symbols that appear more often than any other kinds of figures—signs that have never really been studied or explained until now.

Part travel journal, part popular science, part personal narrative, von Petzinger’s groundbreaking book starts to crack the code on the first form of graphic communication. It’s in her blood, as this talented scientist’s grandmother served as a code-breaker at Bletchley. Discernible patterns emerge that point to abstract thought and expression, and for the first time, we can begin to understand the changes that might have been happening inside the minds of our Ice Age ancestors—offering a glimpse of when they became us.

Genevieve von Petzinger studies cave art from the European Ice Age and has built a unique database that holds more than 5,000 signs from almost 400 sites across Europe. Her work has appeared in popular science magazines such as New Scientists and Science Illustrated. A National Geographic Emerging Explorer of 2016, she was a 2011 TED Global Fellow, a 2013-15 TED Senior Fellow and her 2015 TED talk has more than 2 million views.

Praise For The First Signs: Unlocking the Mysteries of the World's Oldest Symbols…

"The fundamental elements of the art of the Upper Paleolithic remained essentially unchanged for at least 20,000 years, five times the chronological distance that separates us from the builders of the Great Pyramids at Giza. For generations scholars have attempted to understand this slow unfolding of consciousness, this primordial flash of the human spirit that ultimately led to the creation of culture. Genevieve von Petzinger reveals that, beyond the figurative art, the iconic images of horses and bison so transcendent in their beauty, are 32 signs that may represent a vocabulary written literally in stone, symbols that offer an opening into the Paleolithic mind. This may represent one of the most extraordinary scientific insights of our time."
— Wade Davis, author of The Serpent and the Rainbow

"If you love mysteries, you'll love this book. Archaeologist von Petzinger acts as guide and sleuth in this fascinating, accessible, and fast-paced exploration of Ice Age artists and the evocative cave paintings they left behind. You'll feel as if you're with her as she plunges into caverns to examine the ancient and exquisite depictions of horses, mammoths, and bison. And you'll puzzle with her over the strange, abstract symbols the artists often painted alongside the animals. Scientists have long debated these images. Now, von Petzinger offers a new way to think about why our distant relatives created this art, and what it means. You'll come away with a deeper appreciation for these great artists, their love of animals and the natural world, and their connection to us."
— Virginia Morell, author of Animal Wise and Ancestral Passions.

“Few mysteries intrigue more than what the numerous abstract symbols they inscribed on cave walls actually meant to the gifted artists of the last Ice Age. In this wonder-filled book Genevieve von Petzinger takes us tens of thousands of years back in time, and to some stunningly beautiful sites, in a fascinating attempt to penetrate the psyches of those ancient people.”
— Ian Tattersall, author of The Strange Case of the Rickety Cossack and Other Cautionary Tales from Human Evolution and Curator of the Spitzer Hall of Human Origins, American Museum of Natural History

"I enjoyed reading Genevieve von Petzinger’s book The First Signs: My Quest to Unlock the Mysteries of the World’s Oldest Symbols. Ms. Von Petzinger has created a fascinating look at signs found in the caves that have not been thought of before. I have been in many of the caves myself and recognized many of the symbols. I thought her analysis of the symbols reflected the intelligence of our ancient ancestors. She has done a remarkable job of analyzing part of the cave art that has never been done in that way before."
— Jean Auel, author of the bestselling Earth's Children series

"My grandmother, Mary Leakey, traced some of the oldest known rock art in Africa, and while my work spans a much earlier time, this is something that I’ve always been curious about. In this fascinating book, Genevieve von Petzinger takes you on a journey through later prehistory, interspersed with personal anecdotes of her exploration, often in muddy tunnels in dark caves in remote corners of Europe. She delves expertly into many of the questions I have often contemplated around the earliest expressions of art, symbols and language, providing us with an extensive exploration of the artists in the mostly European landscape and offering her interpretation of the clues and evidence surrounding the later transition towards fully modern cognition."
— Louise Leakey, paleontologist, Director at the Turkana Basin Institute

"Brings fresh eyes and fascinating theses to the study of ancient rock art... Lively... Linking these systems to other graphic conventions may eventually yield some sort of Rosetta stone...  Anyone who's longed to visit Lascaux or the caves of Cantabria will be eager to read von Petzinger's admirable efforts at cracking the code."
— Kirkus

"The author's style adds immensely to the enjoyment of the book. Von Petzinger's findings are significant for comprehending the origins of symbolic thinking...  An exceptional read that should capture the imagination of anyone fascinated by time, humanity, and prehistory."
— Library Journal (Starred Review)