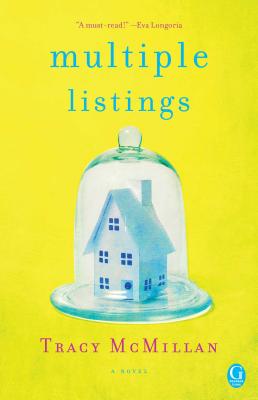 From Tracy McMillan, an author who counts both Oprah Winfrey and Tina Fey as fans, Multiple Listings is a comedic family drama focusing on a single mother whose ex-con father is released from prison after seventeen years and unexpectedly moves in with her, her son, and her much younger boyfriend.

Nicki Daniels owns a home appraisal business, but real estate is her true passion: she lives for open houses and really knows her way around a floor plan. And especially at this juncture of her life, real estate has come to signify the stability she is trying to build with her teenage son, Cody, and her much younger boyfriend, Jake. She’s finally ready to find the perfect house for the three of them and work on a new business venture with Jake that she thinks will jump-start their lives together.

Meanwhile, Ronnie, a longtime inmate at a nearby correctional facility, is getting some good news for once—there was a mistake in his sentencing, and he’s finally eligible to get out of prison. Ronnie decides his best option to avoid homelessness is to move in with his estranged daughter: Nicki. Even though they haven’t spoken in years, her door is always open to him, right?

Harkening to the work of bestselling author Maria Semple and imbued with wit and profound insight into relationships, Multiple Listings speaks poignantly—and often hilariously—about the ties that bind families of all types together.

Praise For Multiple Listings: A Novel…

“Multiple Listings will make you cry both from laughing hysterically and pulling on your heartstrings with its beautiful message about what really makes a house a home. A must-read!”
— Eva Longoria

"Tracy McMillan brings her trademark blend of sassiness and compassion to Multiple Listings, finding both hilarity and wisdom in unlikely places. McMillan's sparkling wit, gimlet eye for detail and large, generous heart infuse the pages of her wonderful and compulsively readable new novel. You won't be able to put it down!"
— Jillian Lauren, New York Times bestselling author of SOME GIRLS and EVERYTHING YOU EVER WANTED

"Multiple Listings is a compelling page-turner that leaves the reader at once satisfied and curious.”
— Chicago Tribune

“McMillan's debut novel is a fun read, thanks to the conversational, fluid voice of Nicki, which is successfully sustained throughout.”
— Publishers Weekly

Tracy McMillan is the author of the memoir I Love You and I’m Leaving You Anyway, as well as Why You’re Not Married...Yet, based upon an essay she wrote for The Huffington Post that went viral. She has also written for the Emmy Award-winning AMC series Mad Men, as well as Showtime’s United States of Tara, ABC’s Life on Mars, and NBC’s Journeyman. McMillan was one of the matchmakers on NBC’s dating reality show Ready for Love and has appeared as a relationship expert on the Today show and Oprah’s Super Soul Sunday.
Loading...
or
Not Currently Available for Direct Purchase