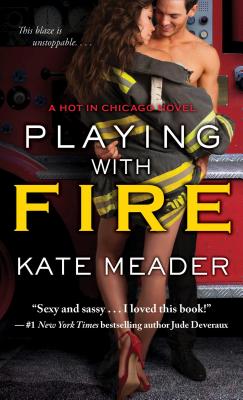 Playing with Fire (Hot in Chicago)

From popular romance author Kate Meader comes the second novel in Hot in Chicago, a brand-new, sizzling series that follows a group of firefighting foster siblings and their blazing hot love interests!

As the only female firefighter at Engine Co. 6, Alexandra Dempsey gets it from all sides: the male coworkers who think she can’t do the job, the wives and girlfriends who see her as a threat to their firefighter men, and her overprotective foster brothers who want to shelter their baby sister at all costs. So when she single-handedly saves the life of Eli Cooper, Chicago’s devastatingly handsome mayor, she assumes the respect she’s longed for will finally come her way. But it seems Mr. Mayor has other ideas…

Eli Cooper’s mayoral ratings are plummeting, his chances at reelection dead in the water. When a sexy, curvaceous firefighter gives him the kiss of life, she does more than bring him back to the land of the living—she also breathes vitality into his campaign. Riding the wave of their feel-good story might prop up Eli’s flagging political fortunes, but the sizzling attraction between them can go nowhere; he’s her boss, and there are rules that must be obeyed. But you know what they say about rules: they’re made to be broken…

Originally from Ireland, Kate Meader cut her romance reader teeth on Maeve Binchy and Jilly Cooper novels, with some Harlequins thrown in for variety. Give her tales about brooding mill owners, oversexed equestrians, and men who can rock an apron, a fire hose, or a hockey stick, and she's there. Now based in Chicago, she writes sexy contemporary romance with alpha heroes and strong heroines (and heroes) who can match their men quip for quip. Visit her at KateMeader.com.
Loading...
or support indie stores by buying on