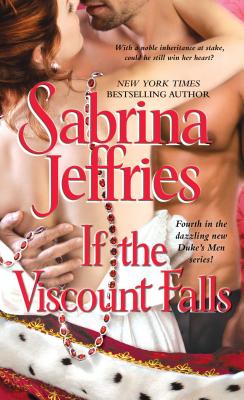 If the Viscount Falls (The Duke's Men #4)

The heir presumptive to the Viscount Rathmoor, Dominick Manton once had his heart’s desire within reach—a bright future as a barrister and engagement to Jane Vernon, a wealthy baron’s daughter. Then a shattering betrayal by his vindictive brother George snatched away Dom’s inheritance and his hopes of offering Jane a secure future. Brokenhearted, and attempting to end their engagement without destroying Jane’s reputation, Dom staged a betrayal of his own to convince her that he’s not the husband-to-be that she thought.

Now George is gone and the viscountcy restored to Dom, since his brother’s widow, Nancy—Jane’s cousin and closest confidant—never bore an heir. But when Nancy goes missing, a panicked Jane calls on her former fiancé to track down her cousin. Dom knows the mistakes of the past may be unforgiveable—but now, entangled together in mystery and danger, will they rekindle a passionate longing that was never lost to begin with?

Sabrina Jeffries is the New York Times and USA TODAY bestselling author of several Regency-set historical romance series, including the Royal Brotherhood, the School for Heiresses, the Hellions of Halstead Hall, the Duke’s Men, and the Sinful Suitors. When she’s not writing in a coffee-fueled haze, she’s traveling with her husband, caring for her adult autistic son, or indulging in one of her passions: jigsaw puzzles, chocolate, music, and costume parties. With more than nine million books in print in twenty languages, the North Carolina author never regrets tossing aside a budding career in academics for the sheer joy of writing fun fiction and hopes that one day a book of hers will end up saving the world. She always dreams big.
Loading...
or
Not Currently Available for Direct Purchase