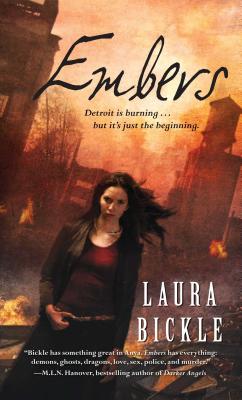 The first book in the thrilling fantasy series about arson investigator Anya Kalinczyk, the fires she fights and the demons she hunts.

Unemployment, despair, anger—visible and invisible unrest feed the undercurrent of Detroit’s unease. A city increasingly invaded by phantoms now faces a malevolent force that further stokes fear and chaos throughout the city.

Anya Kalinczyk spends her days as an arson investigator with the Detroit Fire Department, and her nights pursuing malicious spirits with a team of eccentric ghost hunters. Anya—who is the rarest type of psychic medium, a Lantern—suspects a supernatural arsonist is setting blazes to summon a fiery ancient entity that will leave the city in cinders. By Devil’s Night, the spell will be complete, unless Anya—with the help of her salamander familiar and the paranormal investigating team—can stop it.

Anya’s accustomed to danger and believes herself inured to loneliness and loss. But this time she’s risking everything: her city, her soul, and a man who sees and accepts her for everything she is. Keeping all three safe will be the biggest challenge she’s ever faced.

Laura Bickle grew up in rural Ohio, reading entirely too many comic books out loud to her favorite Wonder Woman doll. After graduating with an MA in sociology–criminology from Ohio State University and an MLIS in library science from the University of Wisconsin-Milwaukee, she patrolled the stacks at the public library and worked with data systems in criminal justice. She now dreams up stories about the monsters under the stairs. Her work has been included in the ALA’s Amelia Bloomer Project 2013 reading list and the State Library of Ohio’s Choose to Read Ohio reading list for 2015–2016. More information about Laura’s work can be found at LauraBickle.com.
or support indie stores by buying on
Copyright © 2020 American Booksellers Association