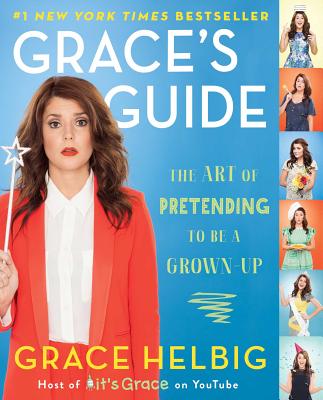 The Art of Pretending to Be a Grown-up

By the host of The Grace Helbig Show on E! and the it’sGrace YouTube channel, comedian Grace Helbig offers an irreverent and illustrated guide to life for anyone faced with the challenge of growing up.

Infused with her trademark saucy, sweet, and funny voice, Grace’s Guide is a tongue-in-cheek handbook for millennials, encompassing everything a young or new (or regular or old) adult needs to know, from how to live online to landing a job to surviving a breakup to decorating a first apartment, and much more. Charmingly illustrated, Grace’s Guide features full-color photos, interactive worksheets, and exclusive stories from Grace’s own misadventures, including her disastrous interview for NBC’s Page Program, her lifelong struggles with anxiety, the first (and also last) time she entered a beauty pageant, meeting her first boyfriend at a high school Latin convention, and many other hilarious lessons she learned the hard way.

Amusing and unexpectedly educational, this refreshing and colorful guide proves that becoming an adult doesn’t necessarily mean you have to grow up.

Praise For Grace's Guide: The Art of Pretending to Be a Grown-up…

"Grace Helbig is my spirit animal and I would gladly take her to lunch at Macaroni Grill so we could talk Latin conventions, first love, and hangover remedies. I wouldn't even expect her to put out."–Jenny Han, author of To All the Boys I’ve Loved Before

“Grace Helbig is one of the funniest, most creative beings on this damn planet and if you don't read her book and enjoy the crap out of it you simply hate wonderful things.”
— Chris Hardwick, host of @midnight on Comedy Central and founder and CEO of Nerdist Industries

"Grace Helbig is a sparkly vessel of wit and fun!"
— Andy Cohen, author of Most Talkative

“Grace’s genius is to make you laugh even when faced with something as mundane (and terrifying) as a job interview. And her honesty about her struggles with anxiety is particularly inspiring. I’ve been an adult longer than Grace, but I was doing it wrong. After reading this book, I bought six dozen sticks of deodorant, put my underwear outside my front door, and rolled around on the floor in a blanket taco. Thanks, Grace!”
— Maureen Johnson, author of 13 Little Blue Envelopes

“I've always looked up to Grace Helbig—and not only because she's a giantess!—because she has the extraordinary ability to accomplish whatever she sets out to do. I think this book is a testament to that.”
— Hannah Hart, author of My Drunk Kitchen

"One of YouTube's most endearing personalities."
— Variety

“This book is just like Grace Helbig--hilarious, bright, and will cut you when you least expect it. Seriously, paper cuts are no joke. This is high-quality paper stock.”
— Mamrie Hart, Host of You Deserve a Drink on YouTube

Grace Helbig, author of the #1 New York Times bestselling Grace’s Guide, is a comedian, actress, YouTube personality, and host of The Grace Helbig Show on E! She previously hosted DailyGrace on My Damn Channel, before leaving in January 2014 to create her own YouTube channel, it’sGrace, which has more than two million subscribers and 150 million views. Grace is the executive producer and star of the feature film Camp Takota. She is the winner of the People’s Voice Webby Award for Best First Person Format and the Streamy Award for Personality of the Year and Best First-Person Series. Grace has been named one of Variety’s 10 Comics to Watch, Fast Company’s 100 Most Creative People in Business, and Forbes’s 30 under 30.
Loading...
or
Not Currently Available for Direct Purchase