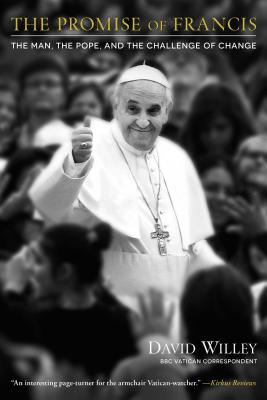 The Promise of Francis (Paperback)

The Man, the Pope, and the Challenge of Change

With more than four decades of firsthand experience reporting from Vatican City, David Willey explores the religious and personal background of Pope Francis and his ability to fulfill the promises of reform made during the first two years of his papacy.

Sex crimes and cover-ups, financial scandal, declining membership, and the unprecedented resignation of its chief executive, Pope Benedict XVI. These were the ingredients of a twenty-first century crisis in the Vatican—a crisis that might have anticipated the election of a steadily conservative pope, a career bureaucrat, and an insider. An operator. Instead they chose Francis.

Using his unparalleled access and knowledge of the inner workings of the Vatican, BBC correspondent David Willey chronicles Francis’s first two years as pope and analyzes what could happen in the years to come. He tells the inside story of how this most unlikely man came from “the end of the world” to lead the world’s largest corporation into the future, stirring millions to interest and faith again through his frank speeches and benevolent beliefs. In putting this all into context, Willey seeks to further unravel the mysteries and conspiracies that continue to surround the worldwide headquarters of the Roman Catholic Church.

The world has never seen the Church in a greater state of flux, as Francis’s words and deeds have enchanted, entertained, and sometimes enraged the public. In this comprehensive biography complete with full-color photography, David Willey explores the religious and personal background of the inspirational Pope Francis, his stunning impact on the Catholic Church, the hopes he has raised, and the legacy he will leave behind.

David Willey has reported for the British Broadcasting Corporation (BBC) from Rome since 1971 under five Popes: Paul VI, John Paul I, John Paul II, Benedict XVI, and Francis I. He is their longest serving foreign correspondent. He also broadcasts about the Vatican for NPR, CBC, ABC in Australia, Deutsche Welle Radio and TV in Berlin, and Swiss and Austrian Radio. His articles have appeared in The Tablet, The Observer (London), and the Sunday Telegraph. In 2004 he was awarded the Order of the British Empire (OBE) by Queen Elizabeth II for his services to broadcast journalism.

Praise For The Promise of Francis: The Man, the Pope, and the Challenge of Change…

"Willey's take on the pope is certainly positive, and his views on the topics presented are always clear. An interesting page-turner for the armchair Vatican-watcher."
— Kirkus
or
Not Currently Available for Direct Purchase
Copyright © 2020 American Booksellers Association