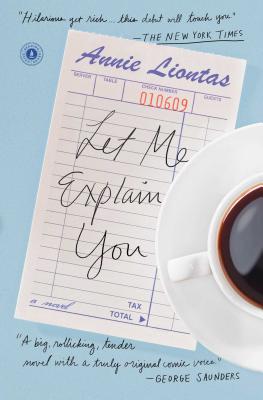 Let Me Explain You (Paperback)

“Let Me Explain You opens with an e-mail message written by Stavros Stavros Mavrakis, Greek immigrant and restauranteur, to his three grown daughters and his ex-wife. He is dying, with just over a week left to live, he believes, and his e-mail message outlines how he wants these women's lives to be better -- if only they will follow his sage advice. From this concise and brilliant setup, the novel takes off with vivid, endearing characters and captures the tender complexity of relationships between parents, children, and siblings. With the quirkiness and humor of a light read combined with true depth of insight into relationships, this is a wonderful debut from a promising new writer.”
— Jamaica Ritcher (E), Bookpeople Of Moscow, Moscow, ID
View the List

An unforgettable novel about a Greek American family and its enigmatic patriarch from a significant new voice in contemporary literature: “Hilarious yet rich…This debut by Annie Liontas will touch you” (The New York Times).

Stavros Stavros Mavrakis, Greek immigrant and proud owner of the Gala Diner, believes he has just ten days to live. As he prepares for his final hours, he sends a scathing email to his ex-wife and three grown daughters, outlining his wishes for how they each might better live their lives. With varying degrees of laughter and scorn, his family and friends dismiss his behavior as nothing more than a plea for attention, but when Stavros disappears, those closest to him are forced to confront the possibility of his death.

A vibrant tour de force that races to a surprising conclusion, Let Me Explain You is told from multiple perspectives: Stavros Stavros, brimming with pride and cursing in broken English; his eldest daughter Stavroula, a talented chef in love with her boss’s daughter; her sister, the wounded but resilient Litza; and many other voices who compose a veritable Greek chorus.

Funny yet deeply moving, this “pitch perfect” (San Francisco Chronicle) novel delivers a thoughtful meditation on the power of storytelling. In Let Me Explain You, Annie Liontas explores our origins and family myths, the relationship between fathers and daughters, the complex bond of sisterhood, hunger and what feeds us, but “the novel’s true heart is one filled with love and forgiveness” (Minneapolis Star-Tribune).

A graduate of Syracuse University’s MFA program, Annie Liontas writes fiction and poetry. Since 2003, Annie has been dedicated to urban education, working with teachers and youth in Philadelphia, and Newark, NJ. Let Me Explain You is her first novel. She lives with her wife in Philadelphia.

Praise For Let Me Explain You: A Novel…

“[Stavros] is an irascible, grandstanding, rhetorical-question-asking, self-pitying fellow, ‘more shovel than man’ as Liontas puts it, in one of many excellent turns of phrase…. It’s his two eldest daughters who emerge as the book’s broiling core… Liontas’s voice is rambunctious… The experience of Let Me Explain You is less of reading a book than of renting a room in someone’s brain… a festive place to visit.”
— Molly Young

"We don’t hear much from the Greek-American school of literature, which makes LET ME EXPLAIN YOU, a hilarious yet rich novel about Stavros Stavros Mavrakis, an immigrant from Crete, his perception of his own mortality, and the women in his life, even more of a treat than grandma’s galaktoboureko,the custard pastry for which his flagship diner, the Gala, is named. This debut by Annie Liontas will touch you even if your own roots are not steeped in Greek coffee."
— Helen T. Verongos

"Darkly comic... Liontas shows compassion for her characters even as she plumbs their dysfunction. Seeded with family anecdotes, the novel’s true heart is one filled with love and forgiveness."
— Carol Memmott

“A wickedly funny and compassionate novel about a very contemporary Greek-American family. Annie Liontas gives us their story with precise and wonderful particularity; she shows us how the arguments, the omens, the foods, and the memories intimately bind them to one another. A sparkling debut from an exciting new writer.”
— Dana Spiotta, author of Stone Arabia and Eat the Document

“A big, rollicking, tender novel and family saga with a truly original comic voice at its center.”
— George Saunders

“Annie Liontas has fashioned from the raw facts of immigrant experience and family life a hilarious, fascinating, poetic work of fiction. You'll find yourself rereading it aloud for the guffaws it yanks from you. A dazzling debut destined to become a classic.”
— Mary Karr, author of The Liar's Club and Lit

“Stavros Stavros Steve Mavrakis is among the most brilliantly foolish, compellingly maddening, and memorable characters I have come across in any modern novel. Or Greek diner. Let Me Explain You displays the author’s intense sensitivity to both language and humor, used to tremendous emotional effect.Annie Liontas is a star.”
— Rivka Galchen, author of Atmospheric Disturbances

"A tale of an immigrant family rendered with unusual care."
— Kirkus

"A funny and moving rumination on the beauty and complexity of familial bonds... a page-turner that concludes in an unexpected way."
— Muses & Visionaries Magazine

"Liontas adds tremendously to the novel's ambiance through Stavros's idiomatic language, expertly reveals the layers of her characters' lives, and perfectly captures their emotional temperatures in an unputdownable read."
— Publishers Weekly

"Tradition and transformation are the ingredients that make up this Greek American family... Liontas's multigenerational tale of miscommunications and mistakes is a delectable, provocative achievement."
— Library Journal

"A lively portrait ... this simultaneously sad and funny story of a first-generation immigrant and hisrocky family relationships will resonate with a broad range of readers."
— Deborah Donovan

"Let Me Explain You is about the American dream: the good, the bad, the ugly and the hilariously relatable... Liontas tells her story masterfully. We’re invited into the family’s inside jokes, and we laugh, hurt and cry with the characters as they peel away the family drama and generational divides and, somewhat unexpectedly, find love at the center of their story."
— Carrie Rollwagen

"Liontas’ energetic saga infuses a poignant family drama with raucous humor and outsize characters... Let Me Explain You has both heart and hilarity, the perfect combination."
— Claire Fallon

"Evocative... while Steve’s elephantine personality could virtually constitute its own Greek chorus, Liontas writes the women who surround him with equal amounts of verve, and more than enough heart, to soften his rough edges."
— Bustle

"Disappointment, survival, resilience, and triumph: it’s a heady brew, as strong as the coffee served in a Greek kafenio... a generous helping of humor strikes the perfect bittersweet balance."
— Megan Labrise

"Humorous and heartfelt... treats its characters with so much empathy and tenderness that it's hard not to think of the Mavrakis family as any other than the reader's own."
— Josh Potter

Liontas awards all her characters a deeply inhabited interiority... pitch perfect... explores what it means to be foreign — to a place, to those around us and to ourselves — and what we take in, what we long for and how we interpret it... Liontas beautifully explores the ways we devour one life to create another... This is what I want from fiction, a story that is, and makes me feel, very much alive.
— Natalie Bakopoulos