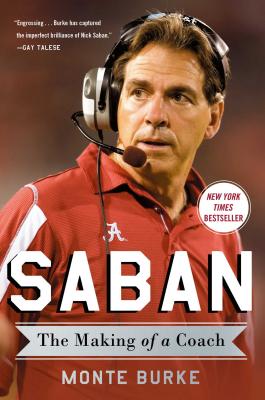 The Making of a Coach

“Insidery, detailed, and absorbing. Come for the chapter titled ‘Why Can’t He Be Happy’ and stay for the one called ‘Miami Vice.’” —Sports Illustrated

A defining biography of Nick Saban, the influential and polarizing University of Alabama football coach who not only transformed the college game but might also be the best ever at winning.

As the head coach of the University of Alabama’s football team, Nick Saban is perhaps the most enigmatic man in the sport. Unpredictable in his professional loyalties, uncompromising in his vision, and unyielding in his pursuit of perfection, the highest-paid coach in college football has changed the face of the game. His program-building skills have delivered packed stadiums, rabid fans, hundreds of millions of dollars, legions of detractors, countless NFL draft picks, and a total of four national championships, including three in the last six years. Monte Burke’s Saban—the first major biography of the man who has come to epitomize the game—presents this towering figure with a never-before-seen human depth.

Through unprecedented interviews with more than 250 friends, coworkers, rivals, former players, and others, Burke reveals the defining moments of the coach’s life. Saban paints a portrait of a complex and compelling man, fundamentally shaped by both his past and the game he loves, in a way that no previous book has.

Praise For Saban: The Making of a Coach…

“Insidery, detailed, and absorbing. Come for the chapter titled ‘Why Can’t He Be Happy’ and stay for the one called ‘Miami Vice.’”
—Sports Illustrated

“In this well-reported, engrossing tale, Monte Burke has captured the imperfect brilliance of Nick Saban. Read it, and you will emerge with a deeper understanding of the man, his zeal, his achievement, and the costs that have come with it all.”
—Gay Talese

“An eye-opening book. Monte Burke has finally taken us behind the great big curtain and, for the first time, shown us who Nick Saban really is and what makes him tick. I couldn’t put this book down. For all college football fans, this is a must-read.”
—Paul Finebaum, ESPN college football analyst

“Monte Burke has written the most comprehensive portrait yet of football’s most enigmatic coach. Saban is as close as the average fan will ever get to watching film or riding in a golf cart with the man himself.”
—Warren St. John, author of Rammer Jammer Yellow Hammer

“If you are a fan of college football—or sports in general—you must read this book. Monte Burke does a deep dive into the life and career of Nick Saban and surfaces with an honest and compelling portrait of one of the most complex, driven and successful coaches on the planet.”
—Winston Groom, author of Forrest Gump and The Crimson Tide: The Official Illustrated History of Alabama Football

“Smart and passionate, Saban combines the ardor of a fan with the eye of a journalist. Monte Burke has his finger on the pulse of the number one coach and the number one program in college football.”
—Allen Barra, author of The Last Coach: A Life of Paul “Bear” Bryant

“A comprehensive biography . . . Through interviews with more than 250 people in Saban’s inner circle, including players, athletic directors, even golf buddies, Burke reveals the underpinnings of Saban’s success—from his perfectionist father to his obsession with strategy to his West Virginia coal-mining hometown.”
—Garden & Gun

“A no-holds-barred glimpse into the quest for perfection that has driven Saban to win four national titles in his nineteen years as a college head coach. . . . Burke has written a winning, definitive portrait of a fascinating character.”
—Publishers Weekly

“Burke takes readers into locker rooms, onto the field, and into recruits’ living rooms, as friends, foes, and colleagues shed light on the life of one of today’s most successful college football coaches. . . . Burke wisely focuses on the man rather than the play-by-play, and the result is a genuinely insightful look at a fierce competitor who nevertheless seems to care for his players both on and off the field.”
—Booklist

Monte Burke is a staff writer at Forbes magazine and has also written for The New York Times, Outside, Men’s Journal, Town & Country, and Garden & Gun, among many other publications. He is the author of the books Saban: The Making of a Coach, 4th and Goal, and Sowbelly, and is a recipient of Barnes & Noble’s “Discover Great New Writers” award. He grew up in New Hampshire, Vermont, North Carolina, and Alabama and now lives in Brooklyn with his wife and three daughters.
Loading...
or
Not Currently Available for Direct Purchase