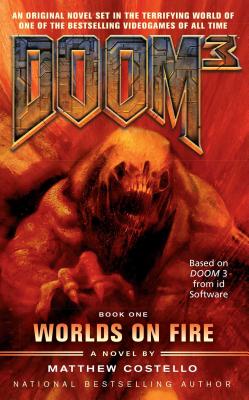 The year is 2144...and the battle over Earth's precious resources has raged for a century. With global economies in ruins and all-out world war more than a possibility, the U.S government turned to the Union Aerospace Corporation, giving it carte blanche on the legendary red planet of Mars in a desperate bid to construct an off-world outpost that might provide resources, a military advantage...as well as something so secret that even members of government don't have a clue about it....

Special Ops Marine Lieutenant John Kane was once a careerist simply glad to have a job, and couldn't care less about politics just as long as Uncle Sam's check cleared. But that was before he listened to his conscience and disobeyed a direct order. Busted down to private, Kane has been reassigned to the "U.S. Space Marines" -- the private army of the UAC -- with the prospect of becoming little more than a glorified security guard on Mars....

Now Lt. Kane's fate leads him to Mars City -- part environmental community, part lab center, and all owned and protected by the UAC. It's a strange world with a fatal environment, and the thousands who live and work within the city have already begun to think of themselves as Martians. And away from Mars City, at the strange ancient sites uncovered on the planet, a small squad of marines stand guard while scientists uncover wall glyphs and search for artifacts, having already found something that is so far amazing and inexplicable -- including the relic called "U1," nicknamed "the Soul Cube" -- and unknown to all, the bringer of destructive chaos and unspeakable horror....

Matthew Costello is the bestselling author numerous titles, including the Cherringham series and the Mydworth Mysteries series. He has also written several tie-in novels for the videogame Doom. His writing has appeared in publications such as Sports Illustrated and the Los Angeles Times.
Loading...
or support indie stores by buying on