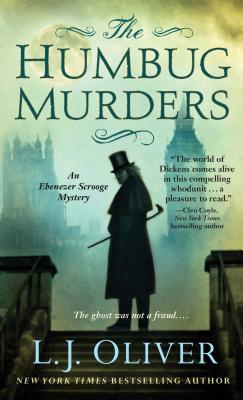 Ebenezer Scrooge from Charles Dickens’s A Christmas Carol investigates a shocking murder—before he becomes the next victim—in this playful mystery in a new series from a New York Times bestselling author.

Scrooge considers himself a rational man with a keen sense of deductive reasoning developed from years of business dealings. But that changes one night when he’s visited by the ghost of his former boss and friend, Fezziwig, who mysteriously warns him that three more will die, and ultimately Ebenezer himself—if he doesn’t get to the bottom of a vast conspiracy.

When he wakes the next day, Scrooge discovers that not only is Fezziwig dead, but he’s under arrest as all evidence points toward himself: Scrooge’s calling card was found in the cold, dead hand of Fezziwig’s body, and someone scribbled “HUMBUG” in blood on the floor nearby.

Now, Scrooge must race against the pocket watch to clear his name, protect his interests, and find out who killed his last true friend—before the “Humbug Killer” strikes again. Joining Scrooge in his adventures is a spunky sidekick named Adelaide, who matches his wits at every turn, plus the Artful Dodger, Fagin, Belle, Pickwick, and even Charles Dickens himself as a reporter dealing in the lurid details of London’s alleyway crimes.

Full of action and wry humor, The Humbug Murders is a fun take on a classic character—Scrooge as you’ve never seen him before.

Praise For The Humbug Murders: An Ebenezer Scrooge Mystery…

“A gritty period mystery that features clever appearances by Dickens and several of his characters. It will appeal…to fans of Michel Faber’s The Crimson Petal and the White.”
— Library Journal

"It's all here in Oliver's tale set during the run-up to Christmas, 1833...Includes enough action and sufficient twists and turns to provide some fun by the fireside, accompanied, perhaps, by a nice glass of Madeira."
— Publishers Weekly

Ciencin wrote over ninety novels in the adult, YA, and children’s genres. A lifelong British mystery fan and Dickens aficionado, he began his career in the film and TV industry and continued in the business as an international film festival blogger, social media content provider, video game consultant, and creative consultant. He died in 2014. Learn more at ScottCiencin.com.

Following a childhood in the snowy mountains of Scandinavia, Wilson traveled to her native England to study criminology and journalism. Inspired by her mother, a personal historian specializing in Victorian-era Britain, Wilson set about exploring the streets of London, where her family originally arrived from Ireland in 1833. She now lives in the United States with her American husband and two daughters, and focuses on her first love: story-telling. Read more at EAAWilson.com
Loading...
or
Not Currently Available for Direct Purchase