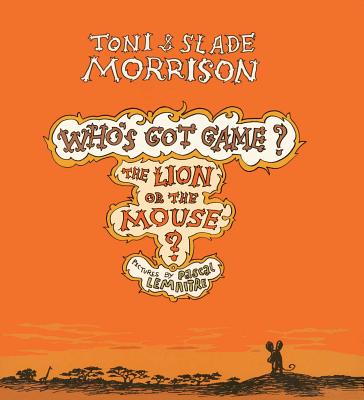 In this charmingly subversive reinterpretation of a classic tale, the Morrisons and Pascal Lemaitre take a hilarious look at bullying.

The cocky lion, the self-proclaimed "baddest in the land," believes himself invincible until he gets a thorn stuck in his paw. Only a weak little mouse can help him, but then the lion must indulge the mouse's ridiculous pride and appetite for power.

Generation after generation, classic fables, folklore, and myth remain popular because they quicken the imagination of readers and listeners of all ages. We, the creators of the Who's Got Game? series were inspired by the wonder of Aesop's Fables—their vitality, their endless demand for more interpretations. In our versions the original stories are opened up and their moralistic endings reimagined; the victim might not lose; the timid gets a chance to become strong; the fool can gain insight; the powerful may lose their grip. Anything can happen!

Pascal Lemaitre illustrated Toni and Slade Morrison's bestselling Who's Got Game?: Three Fables, as well as many other books for children. He and his family divide their time between Brussels, Belgium, where he teaches illustration, and Brooklyn, New York. Visit him online at PascalLemaitre.com.
Loading...
or support indie stores by buying on