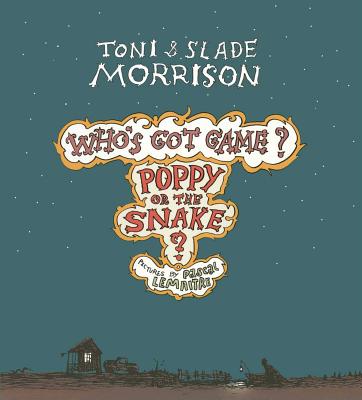 In this clever riff on Aesop, Poppy feels guilty when he accidentally drives over Snake, and he decides to risk being bitten in order to free the sassy reptile. But smake wants more. This is a sly tale about who gets the last laugh.

We, the creators of Who's Got Game? were inspired by the wonder of Aesop's Fables -- their vitality, their endless demand for more interpretations. In our versions the original stories are opened up and their moralisitic endings reimagined; the victim might not lose; the timid gets a chance to become strong; the fool can gain insight; the powerful may lose their grip. ANYTHING CAN HAPPEN. More than a play on these beloved fables, Who's Got Game? is AESOP LIVE!

Slade Morrison was born in Ohio and educated in New York City. He studied art at SUNY Purchase and collaborated with his mother, Toni Morrison, on five books for children.
or
Buy Here
Copyright © 2020 American Booksellers Association