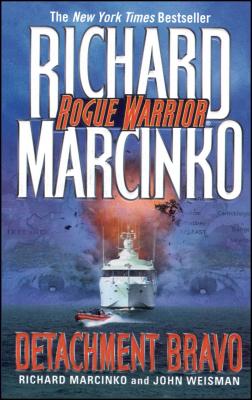 From top-secret diplomatic tunnels beneath London to the high seas off the Azores, the New York Times bestselling SEAL commando of eight explosive thrillers takes on a lethal group of Irish Republican Army terrorists in ROGUE WARRIOR: DETACHMENT BRAVO...

The Rogue Warrior is back in a fast-paced, furious, in-your-face adventure! This time he's on the hunt for a high-tech army that smashed the Good Friday Peace Accord and killed a half dozen American and British CEOs. Launched by two self-financed, new-generation terrorists, this murderous wing of the IRA has an even bigger assault planned -- one that promises to stun the world. Now, along with a special ops team made up of Brits, SEALS, spies, and NSA operatives, Marcinko is determined to stop them, but there are a few unknowns: they don't know the target, they don't know the date, and they don't know where the terror is going down.

John Weisman is one of the select company of authors to have written both fiction and non-fiction New York Times best-sellers. In 1992 he wrote Rogue Warrior with Richard Marcinko. That book, Marcinko's autobiography and the story of the U.S. Navy's elite counterterrorism unit, SEAL Team Six, spent eight months on the Times best-seller list, including four weeks at number one. The sequels, Rogue Warrior: Red Cell, Rogue Warrior: Green Team, Rogue Warrior: Task Force Blue, Rogue Warrior: Designation Gold, and Rogue Warrior: Seal Force Alpha were all New York Times fiction-list best-sellers.
Weisman was appointed a Senior Fellow at the Annenberg Washington Program for Communications Policy Studies of Northwestern University in 1989. Prior to that, he wrote hundreds of articles for publications that run the gamut from the Columbia Journalism Review to Soldier of Fortune. He has lectured on media and writing at the National War College at Fort Leslie J. McNair, the American University, Cornell University, and Longwood College.
His books include the nonfiction best-seller Shadow Warrior, the life story of Felix Rodriguez, the CIA agent who captured Che Guevara, which was published by Simon and Schuster and was the subject of a 60 Minutes segment. His previous novels include Evidence, Watchdogs, and Blood Cries. His acclaimed CIA short story "There Are Monsterim" can be found in the current anthology Unusual Suspects.
Weisman was born in New York City in 1942. He attended the Birch Wathen School and Bard College. He divides his time between homes in the Washington, DC area and the Blue Ridge mountains of Virginia.
He can be reached via email at jweisman@ix.netcom.com
Loading...
or support indie stores by buying on