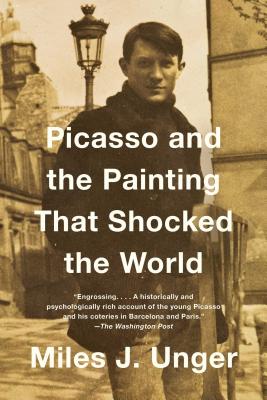 Picasso and the Painting That Shocked the World

“An engrossing read…a historically and psychologically rich account of the young Picasso and his coteries in Barcelona and Paris” (The Washington Post) and how he achieved his breakthrough and revolutionized modern art through his masterpiece, Les Demoiselles d’Avignon.

In 1900, eighteen-year-old Pablo Picasso journeyed from Barcelona to Paris, the glittering capital of the art world. For the next several years he endured poverty and neglect before emerging as the leader of a bohemian band of painters, sculptors, and poets. Here he met his first true love and enjoyed his first taste of fame. Decades later Picasso would look back on these years as the happiest of his long life.

Recognition came first from the avant-garde, then from daring collectors like Leo and Gertrude Stein. In 1907, Picasso began the vast, disturbing masterpiece known as Les Demoiselles d’Avignon. Inspired by the painting of Paul Cézanne and the inventions of African and tribal sculpture, Picasso created a work that captured the disorienting experience of modernity itself. The painting proved so shocking that even his friends assumed he’d gone mad, but over the months and years it exerted an ever greater fascination on the most advanced painters and sculptors, ultimately laying the foundation for the most innovative century in the history of art.

In Picasso and the Painting That Shocked the World, Miles J. Unger “combines the personal story of Picasso’s early years in Paris—his friendships, his romances, his great ambition, his fears—with the larger story of modernism and the avant-garde” (The Christian Science Monitor). This is the story of an artistic genius with a singular creative gift. It is “riveting…This engrossing book chronicles with precision and enthusiasm a painting with lasting impact in today’s art world” (Publishers Weekly, starred review), all of it played out against the backdrop of the world’s most captivating city.

Praise For Picasso and the Painting That Shocked the World…

“The birth of modernism a century ago was one of history's greatest moments of creative disruption, including Einstein's physics, Stravinsky's music, and the writings of Joyce and Proust. One major spark was an astonishing painting by Picasso, and Miles Unger brings us both the drama and brilliance of that creation in this thrilling book.”
— Walter Isaacson, author of Leonardo da Vinci

"An engrossing read. . . . Unger draws not just from his own wide knowledge and considered taste but from an imposing array of journals, memoirs, biographies and periodicals.  From these he offers a historically and psychologically rich account of the young Picasso and his coteries in Barcelona and Paris."

"[A] vibrant biography. . . . Unger succeeds in making Les Demoiselles d’Avignon, the book’s titular painting, accessible. Heady modern art is made over as approachable and exciting."
— Booklist

"Bohemian Montmartre comes brilliantly to life, as do the artist’s struggles."
— The New Yorker

Miles J. Unger writes on art, books, and culture for The Economist. Formerly the managing editor of Art New England, he was a contributing writer to The New York Times. He is the author of Picasso and the Painting That Shocked the World; The Watercolors of Winslow Homer; Magnifico: The Brilliant Life and Violent Times of Lorenzo de’ Medici; Machiavelli: A Biography; and Michelangelo: A Life in Six Masterpieces. Visit MilesJunger.com.
Loading...
or support indie stores by buying on