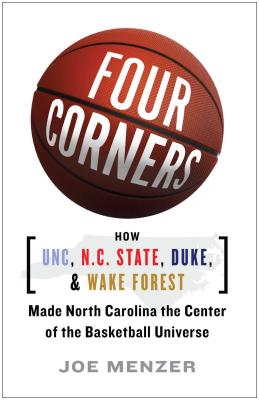 HOW UNC, NC STATE, DUKE, AND WAKE FOREST MADE NORTH CAROLINA THE CROSSROADS OF THE BASKETBALL UNIVERSE

Deep in the heart of tobacco country, the Tar Heel State brings out the best of college basketball: Michael Jordan, James Worthy, and Dean Smith; Grant Hill, Christian Laettner, and Mike Krzyzewski; Billy Packer, Tim Duncan, and Bones McKinney; David Thompson, Lorenzo Charles, and Jim Valvano. What these men have in common -- besides being legends in the world of college hoops -- is that they are all part of Big Four basketball in the state of North Carolina. For the last fifty years the Big Four -- North Carolina, Duke, Wake Forest, and North Carolina State -- have defined greatness on the hardwood courts.
Nowhere else in America are there four schools with such rich basketball history and tradition located so close to one another. The four grew up within a thirty -- four -- mile radius of one another, and to this day, North Carolina, N.C. State, and Duke are only a half hour's drive apart. (Wake Forest, which had been located nineteen miles west of Duke University and sixteen miles north of North Carolina State, received a hefty gift from the R.J. Reynolds Tobacco Company in 1956 to move to Winston -- Salem, 110 miles due west.) In Four Corners, Winston-Salem Journal sportswriter Joe Menzer chronicles the storied histories, timeless traditions, and fierce rivalries that have placed these four basketball -- crazed schools among the best college programs in the nation.
In North Carolina, college basketball is not a matter of life and death; it's much more important than that. It isn't just that these teams are near one another geographically or that they're very good every year. It's the way the fans embrace their team and hate the other three schools that makes the rivalries so dynamic. Newcomers to the region find themselves forced to choose from among the four. You're either a Wolfpack fan, a Blue Devils fan, a Demon Deacons fan, or a Tar Heels fan -- and if you're not a Tar Heels fan, then you're an automatic member of one of the largest organizations in the state no matter what team you root for: the ABC gang -- Anybody But Carolina.
Menzer traces the history of the greatest concentration of talent, success, and venom in all of college sports, He tells the stories of how these four schools established themselves in an era dominated by big-city schools from New York or California, of the ebb and flow of success that each of these schools has experienced throughout the years, of the point-shaving scandals and recruiting violations that periodically rocked the rivalries between the schools, of the numerous ACC and national championships these teams have won, and of the unforgettable personalities who led the programs and dominated the sport.
From the early days of N.C. State's Everett Case and Wake Forest's Bones McKinney to the retirement of North Carolina's Dean Smith, from North Carolina's triple-overtime victory over Wilt Chamberlain's Kansas team in the 1957 NCAA Finals to Christian Laettner's miraculous buzzer beater against Kentucky in the 1992 Eastern Regional final, Menzer presents the sprawling story of the Big Four in an exciting and dramatic fashion. The first book to chronicle the entire history of life in that area of hoops heaven known as Tobacco Road, Four Corners brings back all the memories that have made basketball in the Tar Heel State the force it is today.

Joe Menzer is the author or coauthor of four previous books, including The Wildest Ride: A History of NASCAR and Four Corners: How UNC, N.C. State, Duke, & Wake Forest Made North Carolina the Center of the Basketball Universe. He has written for such publications as Sporting News and Inside Sports. Since 1995 he has covered the Carolina Panthers and the NFL for the Winston-Salem Journal in North Carolina. He lives with his wife and four children in Charlotte, N.C.
Loading...
or support indie stores by buying on