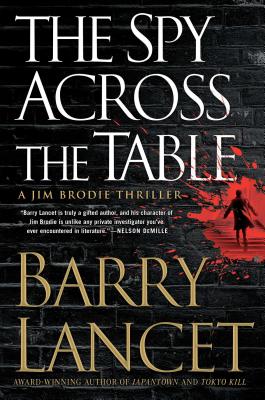 In this exciting international thriller featuring Japanese antiques art dealer and PI Jim Brodie, a double-murder at the Kennedy Center forces Brodie into a dangerous game of espionage—putting him in the crosshairs of the Chinese, North Korean, and American governments.

Jim Brodie is an antiques dealer, Japan expert, and second-generation private investigator. When two theater friends are murdered backstage at a Kennedy Center performance in Washington, DC, he’s devastated—and determined to hunt down the killer. He’s not the only one.

Publishers Weekly said, “Readers will want to see more of the talented Jim Brodie,” and The Spy Across the Table is an edge-of-your-seat thriller in Barry Lancet’s wildly popular and highly acclaimed series.

Barry Lancet is a Barry Award­–winning author and finalist for the Shamus Award. He has lived in Japan for more than twenty-five years. His former position as an editor at one of the nation’s largest publishers gave him access to the inner circles in traditional and business fields most outsiders are never granted, and an insider’s view that informs his writing. He is the author of the Jim Brodie series: The Spy Across the Table; Pacific Burn; Tokyo Kill; and Japantown, which received four citations for Best First Novel and has been optioned by J.J. Abrams’s Bad Robot Productions, in association with Warner Brothers. Visit Lancet at BarryLancet.com or on Twitter @BarryLancet.
Loading...
or
Not Currently Available for Direct Purchase