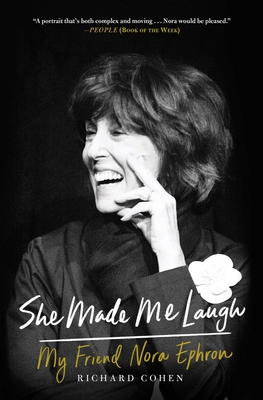 She Made Me Laugh

“A very personal remembrance of Nora Ephron’s life and loves, and her ups and downs” (USA TODAY) by her long-time and dear friend Richard Cohen in a hilarious, blunt, raucous, and poignant recollection of their decades-long friendship.

Nora Ephron (1941–2012) was a phenomenal personality, journalist, essayist, novelist, playwright, Oscar-nominated screenwriter, and movie director (Sleepless in Seattle; You’ve Got Mail; When Harry Met Sally; Heartburn; Julie & Julia). She wrote a slew of bestsellers (I Feel Bad About My Neck: And Other Thoughts on Being a Woman; I Remember Nothing: And Other Reflections; Scribble, Scribble: Notes on the Media; Crazy Salad: Some Things About Women). She was celebrated by Hollywood, embraced by literary New York, and adored by legions of fans throughout the world.

Award-winning journalist Richard Cohen, wrote this about She Made Me Laugh: “I call this book a third-person memoir. It is about my closest friend, Nora Ephron, and the lives we lived together and how her life got to be bigger until, finally, she wrote her last work, the play, Lucky Guy, about a newspaper columnist dying of cancer while she herself was dying of cancer. I have interviewed many of her other friends—Mike Nichols, Tom Hanks, Steven Spielberg, Meryl Streep, Arianna Huffington—but the book is not a name-dropping star turn, but an attempt to capture a remarkable woman who meant so much to so many other women.”

With “the nuanced perspective of a confidant” (The Washington Post), She Made Me Laugh “is a fine tribute to a fascinating woman” (Houston Chronicle): “Nora would be pleased” (People, “Book of the Week”).

Richard Cohen is the author of By the Sword, Chasing the Sun, and How to Write Like Tolstoy. The former publishing director of two leading London publishing houses, he has edited books that have won the Pulitzer, Booker, and Whitbread/Costa prizes, while twenty-one have been #1 bestsellers. He has written for most UK quality newspapers as well as for The New York Times Book Review and The Wall Street Journal, and is a Fellow of the Royal Society of Literature. Connect with him on Facebook @RichardCohenAuthor and Twitter @AboutRichard.
Loading...
or support indie stores by buying on