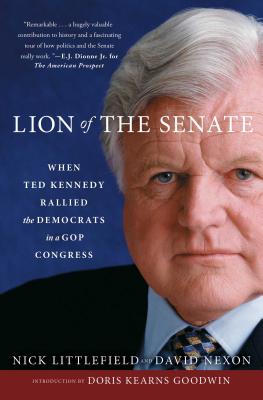 Lion of the Senate (Paperback)

When Ted Kennedy Rallied the Democrats in a GOP Congress

An insider’s look at the two years when Senator Ted Kennedy held at bay both Newt Gingrich and his Republican majority: “For those who love politics and care about policy—and those looking for an account of how Washington used to work, Lion of the Senate is pure catnip” (USA TODAY).

The November 1994 election swept a new breed of Republicans into control of the United States Congress. Led by Speaker of the House Newt Gingrich, the Republicans were determined to enact a radically conservative agenda that would reshape American government. Some wanted to shut down the government. If Gingrich’s “Contract with America” been enacted, they would have shredded the federal safety net, decimated the federal programs, and struck down the regulatory framework that protects health, safety, and the environment. And, were it not for Ted Kennedy, who had defeated Mitt Romney for his Senate seat in 1994, they would have succeeded.

In Lion of the Senate Nick Littlefield and David Nexon describe never-before-disclosed maneuvers of closed-door meetings in which Kennedy galvanized his party, including the two pivotal years, 1995 and 1996, when the Republicans held control of Congress and he fought to preserve the mission of the Democratic Party in the face of the right-wing onslaught. Here is the nitty-gritty of Kennedy’s role, and the details of a fascinating, bare-knuckled, and frequently hilarious fight in the United States Senate.

“Compelling…as a story about how the Senate operates—well, how the Senate used to operate—and a story about perhaps the greatest Senate lawmaker of the second half of the twentieth century, Lion of the Senate succeeds” (The Washington Post) as a political lesson for all time. With an introduction by Doris Kearns Goodwin, this is “a fine rendering that deserves a wide readership” (Kirkus Reviews).

Nick Littlefield was Senator Edward M. Kennedy’s Chief of Staff for the Senate Health, Education and Labor Committee from 1989 to 1998. Recognized as one of the best-respected and most powerful staff members in Congress during his tenure on Capitol Hill, Littlefield was at Senator Kennedy’s side while he spearheaded historic legislation in health care and civil rights.

Before joining Kennedy, Littlefield was a federal prosecutor in New York, chief counsel to an anti-corruption commission in Massachusetts, lecturer at Harvard Law School, and a partner in the law firm Foley Hoag. After leaving Washington in 1998, he returned to his law firm in Boston, where he continued to work on expanding access to healthcare but now from the private sector. Nick retired in 2012. He and his wife, Jenny, live in Cambridge, Massachusetts, have three grown children, and six grandchildren.