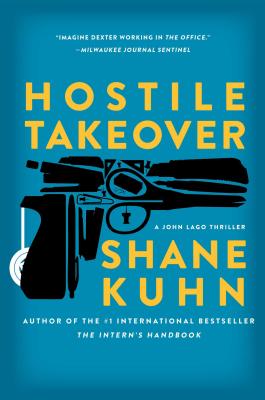 At the end of The Intern’s Handbook, John tracks down his nemesis Alice but instead of putting a bullet in her head, he puts a ring on her finger and marries her. Together, they execute a hostile takeover of Human Resources, Inc., the “placement agency” that trains young assassins to infiltrate corporations disguised as interns and knock off high profile targets. As HR’s former top operatives, they are successful until conflicting management styles cause an ugly breakup that locks John out of the bedroom and the boardroom.

But when Alice takes on a new HR target, John is forced to return to the office battlefield in a role he swore he would never play again: the intern. What starts out as a deadly showdown turns into the two of them fighting side by side to save HR, Inc.—and their marriage.

“Those who like Dexter will love John Lago” (Booklist), and in Shane Kuhn’s sequel to The Intern’s Handbook, readers will be rooting for this smart, witty antihero to come out on top.

“Suspenseful, bloody, and eminently entertaining. Kuhn can spin a fine phrase (a cold day, he says, is “like Flannery O’Connor’s last breath—raw and as hard as the hammer of divine retribution”), and his smart, witty prose carries the day in this masterfully plotted mayhem with more than a touch of wry.” —Booklist (starred review)

“All of the testosterone-bloated wisdom of Tucker Max mixed with the satire of American Psycho.”—Entertainment Weekly

“Kuhn's sharp-as-a-blade humor keeps readers, like the bullets, flying through pages. And despite the deadly doings, Hostile is quite romantic, for Lago is hopelessly smitten with Alice, just a boy standing in front of a girl, asking her not to kill him.”—Shelf Awareness

“Far grittier than a Bond film and infused with the mind-bending, identity-shifting elements of, say, “Mission: Impossible,’’ “Hostile Takeover’’ is fun, smart and jam-packed with serious splatter and gore. Lago’s canny shenanigans will keep you riveted, from its taut opening pages to its explosive, cinematic ending.”—Boston Globe