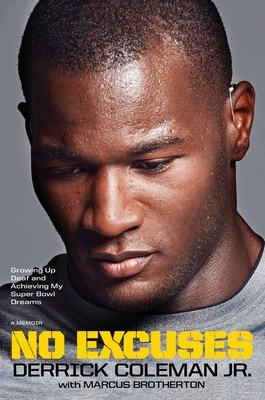 Growing Up Deaf and Achieving My Super Bowl Dreams

Trailblazing Seattle Seahawks fullback Derrick Coleman Jr.—the first deaf athlete to play offense in the NFL—tells his inspirational journey of persevering through every obstacle, remaining dedicated to the hard work and a no-excuses attitude that ultimately earned him a Super Bowl victory. Great for readers of all ages.

Even at a young age, if anyone told Derrick Coleman what he couldn’t do, he’d just reply, “Watch me.” Diagnosed as hearing-impaired at age three, he faced a potentially limited future, but neither he nor his family were going to let that happen. Now Derrick shares the story of his remarkable journey toward NFL stardom, of the friends and colleagues who cheered him on when skeptics tried to chip away at his confidence, and of how every challenge he faced only strengthened his resolve.

At the heart of his story is his unconventional family, whose one constant was always love. When Derrick was misunderstood as “difficult,” or bullied and laughed at by schoolmates, he removed his hearing aids and listened instead to his mother’s advice: Never let anyone else tell you how far you can go.

Playing football became an outlet for Derrick’s restless energy and a way of proving he could forge his own path. As a senior at UCLA, he became a standout, an award-winning player who led his team with eleven touchdowns and demonstrated to the world what his heart had known all along: He had what it took to be a champion.

No Excuses is more than just Derrick Coleman’s story as a sports legend, inspirational role model, and icon. It’s a motivating and unique testament to the human spirit, to the potential inside everyone who has ever faced difficult obstacles. It’s about aiming high in life, giving it your all, and never ever settling for excuses.

Derrick Coleman Jr. is the Super Bowl XLVIII (2014) champion fullback with the Seattle Seahawks who has inspired millions with his upbeat and positive attitude in overcoming the obstacles put before him. The first deaf athlete to play offense in the NFL—and the first to win a Super Bowl—he is also the founder and CEO of the No Excuse Foundation, an organization that advocates for the hearing impaired community and works to lessen instances of bullying. For more information, see his website: DerrickLColeman.com

Praise For No Excuses: Growing Up Deaf and Achieving My Super Bowl Dreams…

"Coleman’s humbling story of overcoming challenges to become the first legally deaf offensive player in the NFL will pull at readers’ heart strings. Writing with Brotherton, he traces his childhood in California in the 1990s, complicated by family turmoil and his hearing problem, which was diagnosed when he was very young, and describes how his parents committed themselves to creating a normal life for him. The athlete is very candid about his fears; he was obsessed with a dream of playing pro football after some promising college UCLA football seasons. Undeterred by tryouts and time on the practice squads of the Minnesota Vikings and the New York Giants, the undrafted Coleman finds a home with the Seattle Seahawks, where his deafness isn't an issue. The highlight of this triumphant account is his sensitive retelling of his first full season in the NFL, the Seahawks' victorious run to the 2014 Super Bowl, and the team's celebration with the Vince Lombardi trophy."
— Publishers Weekly
or support indie stores by buying on
Copyright © 2020 American Booksellers Association