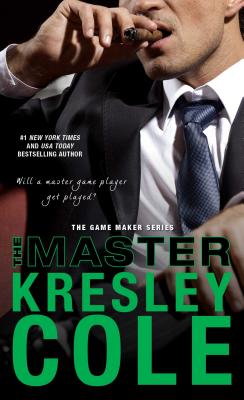 The Master (The Game Maker Series)

A need colder than Siberian winter meets an attitude hotter than the Florida sun in #1 New York Times bestselling author Kresley Cole's sultry new Game Maker novel, the second installment in the series! Get lost in the sizzling world of the Game Maker series with The Professional, book one, and The Player, book three!

Except her.
Catarina Marín was a well-off young wife until her world fell apart. Now she’s hiding out, forced to start working as an escort in Miami. Her very first client is beyond gorgeous, but when he tells her what he plans to do to her, Cat almost walks out of the door.

If pleasure is a game, play to win.
After their mind-blowing encounter burns out of control, the lovers crave more. If they escape the deadly threats surrounding them, can Maksim overcome his past—to offer Cat his future? Only then will she tempt him with what he really wants: her, all tied up with a bow.

Kresley Cole is the #1 New York Times bestselling author of the Immortals After Dark paranormal series and the young adult Arcana Chronicles. Her books have been translated into over twenty foreign languages, garnered three RITA awards, and consistently appear on the bestseller lists in the US and abroad. Before becoming a writer, Cole was a world-ranked athlete, coach, and graduate student. She has traveled over much of the world and draws from those experiences to create her memorable characters and settings. She lives in Florida with her family and “far too many animals,” and spends any free time traveling. You can learn more about her and her work at KresleyCole.com or Facebook.com/KresleyCole. Sign up for Kresley’s email newsletter to receive the latest book release updates, as well as info about contests and giveaways (KresleyCole.com/Newsletter).
Loading...
or support indie stores by buying on