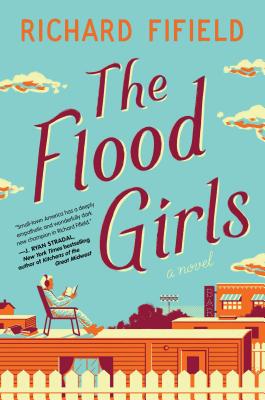 “[The Flood Girls] includes barfights and AA meetings, a parade, a wedding, and a black bear, all of which Fifield juggles beautifully...The Wild West earns its name all over again in this lovable chronicle of small-town insanity.” —Kirkus Reviews, Starred Review

Praise For The Flood Girls: A Book Club Recommendation!…

"From the first page of The Flood Girls, I knew Richard Fifield was an extraordinary force of nature and his debut novel a masterful tour-de-force. This novel is like Richard Russo + E. Annie Proulx + Truman Capote, if Capote were alive today and narrating a reality show about small-town Montana on Bravo. You will be awed."
— Jenna Blum, New York Times bestselling author of Those Who Save Us

"[The Flood Girls] includes barfights and AA meetings, a parade, a wedding, and a black bear, all of which Fifield juggles beautifully...The Wild West earns its name all over again in this lovable chronicle of small-town insanity.”
— Kirkus Review, Starred Review

"THE FLOOD GIRLS is a wild and crazy debut novel by a talented young writer. Edgy and original, it's worth the trip."
— Jackie Collins, New York Times bestselling author

"Reading this novel is like unwrapping the wackiest birthday gift you’ve ever received: The Flood Girls is a heart-shaped box filled with broads, softballs, drunks, Jackie Collins’ paperbacks, music, guns, and, most vibrantly of all, humanity. I started this book laughing out loud; I finished it grieving and grateful. Richard Fifield is the handsomest writer in North America, and perhaps its most compassionate."
— Sharma Shields, author of The Sasquatch Hunter’s Almanac: A Novel

"Richard Fifield is sui generis, and so is his wonderful novel. It sets your hair on fire, and makes you laugh at the pretty flames."
— Deirdre McNamer, author of Red Rover and Rima in the Weeds

"Fifield's darkly humorous and deeply tender debut is an unforgettable carnival of glamorous outcasts, unforgivable women, violent bar brawls, and scrappy softball teams. In his small-town America, where every trailer, church, and bar holds equal capacity for heartbreak, revelation and forgiveness, he's unveiled an original vision of the West written in infield dirt, nail polish, and the blood of people we can't live without."
— J. Ryan Stradal, author of Kitchens of the Great Midwest

"Fifield’s debut is an exaggerated, no-holds barred portrait of a small town that doesn’t easily forget or forgive, and it turns alternately laugh-out-loud funny and…all-too-true."
— Booklist

“In Fifield’s excellent fiction debut, alcoholic Rachel Flood returns to her hometown...This hilarious and profane story takes a tragic turn at the end, revealing just how fragile love and friendship can be.”
— Publisher's Weekly, Starred Review

Richard Fifield earned his MFA from Sarah Lawrence College in upstate New York. For the past twenty years he has worked as a social worker for adults with intellectual disabilities, while volunteering as a creative writing teacher in Missoula, Montana.
Loading...
or
Not Currently Available for Direct Purchase