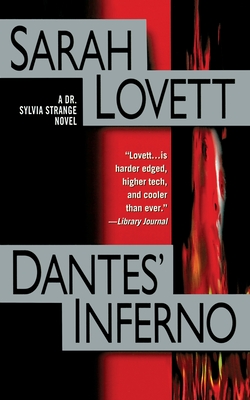 The author of the critically acclaimed novels Dangerous Attachments and Acquired Motives is back with another spellbindingly original thriller featuring forensic psychiatrist Sylvia Strange. Now, in Dantes' Inferno, Sylvia is called to Los Angeles from her New Mexico home when a massive explosion blasts through the J. Paul Getty Museum, endangering children on a field trip and claiming two lives. The police peg notorious bomber John Dantes as the mastermind, even though he's in a maximum-security prison, serving a life sentence for another bombing he claims he didn't commit.
Dr. Strange, a genius at accessing the most tortured psychiatric cases, is called in to evaluate Dantes. The prisoner is said to be unreachable -- and renowned for psychologically terrorizing his every visitor. But Dr. Strange forms a sudden, and unsettling, connection with Dantes. There's something about the enigmatic loner and his obsession with Los Angeles that both confounds and unnerves her. She's not at all convinced he's the man behind the bombs now ripping through the city -- but she is convinced he holds the key to finding the real bomber. The problem remains: how to get at Dantes? The police department's drug-and-interrogation campaign effectively stupefies the patient, and Dr. Strange's inability to get results troubles her deeply pragmatic supervisor, who in turn challenges her approach, her ability, and her intuition. As the death toll rises, so does public outcry, and sanctions against the fully demonized prisoner are further tightened. With the clock ticking on a bomb promised to be of epic proportions, Dr. Strange's sovereignty over her patient is slipping away -- along with, seemingly, her sanity.
Dantes' Inferno is a hypnotic, heart-pounding journey to the soul of madness that reveals disturbing and darkly universal truths about human nature. It is Sarah Lovett's best thriller yet.

Sarah Lovett worked as a researcher at the New Mexico State Penitentiary. Her previous novels are "Acquired Motives, Dangerous Attachments, " and "A Desperate Silence." Raised in California, she now makes her home in Santa Fe.
Loading...
or support indie stores by buying on