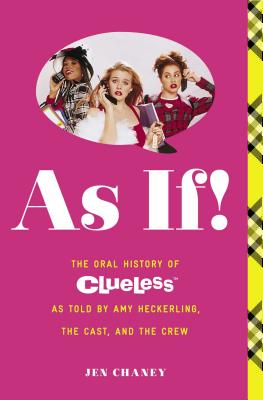 Will we ever get tired of Clueless? Ugh, as if!

Chaney explores the influence of Jane Austen’s Emma as the unlikely framework for Heckerling’s script, the rigorous casting process (including the future stars who didn’t make the cut), the functional yet fashion-forward wardrobe, the unique slang that drew from the past and coined new phrases for the future, the sun-drenched soundtrack that set the tone, and—above all—the massive amount of work, creativity, and craft that went into making Clueless look so effortlessly bright and glossy.

As If! illuminates why plaid skirts and knee socks will never go out of style, and why Clueless remains one of the most beloved comedies of all time.

Jen Chaney has been a journalist for twenty years and has spent much of that time writing about movies, television, and popular culture. She currently writes reviews, feature stories, essays, and TV analyses for numerous publications, including New York magazine, The Washington Post, Esquire, Salon, and Yahoo.com. Chaney is a graduate of the College of William & Mary, and lives with her husband, son, and beagle just outside of Washington, DC.

Praise For As If!: The Oral History of Clueless as told by Amy Heckerling and the Cast and Crew…

"It's one of those books we needed without realizing it: an oral history of the making of Clueless. . . . A treat for fans."
— People

“For its 20th birthday, the 90s classic Clueless gets a hilarious—and comprehensive—oral history.”
— Entertainment Weekly (Must List selection)

"Chaney’s homage does not disappoint. . . . [She] weaves a glittery web, one that’s hard to walk away from once you’re drawn in. . . . For us middle-aged Gen X-ers and our adolescent offspring who still watch Clueless at sleepovers, As If! is a must. In fact, it’s phat! Which is high praise, indeed."
— Washington Post

“In As If!, everyone involved with the picture is interviewed, giving fans a window into how the movie became a classic.”
— New York Post

“[Chaney] seems to have gotten just about everyone involved in Clueless to talk to her about the making of the movie. . . . The behind-the-scenes memories will thrill those who loved the movie, and Chaney makes a good case for its enduring influence.”
— Boston Globe

"This book is a must-read for every girl who ever considered buying a white Jeep in honor of Cher Horowitz."
— The Zoe Report

"Packed with awesome behind-the-scenes shots, old-fashioned Polaroids, and every factoid you'll ever need to know, the book should be a bible for 'Clueless' trivia contestants and uber-fans everywhere."
— Refinery29

“Chaney rounded up the cast, crew and other crucial Clueless players to spill behind-the-scenes secrets about the movie. All the juicy stories are in her new book.”
— Metro
or
Buy Here
Copyright © 2020 American Booksellers Association