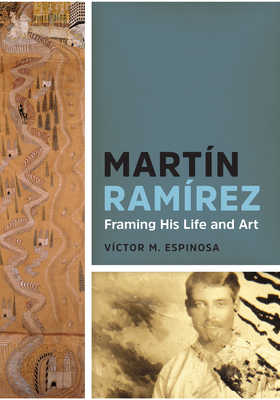 Framing His Life and Art

Martín Ramírez, a Mexican migrant worker and psychiatric patient without formal artistic training, has been hailed by leading New York art critics as one of the twentieth century’s greatest artists. His work has been exhibited alongside masters such as José Clemente Orozco, Diego Rivera, Rufino Tamayo, Salvador Dalí, Marc Chagall, Paul Klee, and Joan Miró. A landmark exhibition of Ramírez’s work at the American Folk Art Museum in 2007 broke attendance records and garnered praise from major media, including the New York Times, New Yorker, and Village Voice. Martín Ramírez offers the first sustained look at the life and critical reception of this acclaimed artist. Víctor Espinosa challenges the stereotype of outsider art as an indecipherable enigma by delving into Ramírez’s biography and showing how he transformed memories of his life in Mexico, as well as his experiences of displacement and seclusion in the United States, into powerful works of art. Espinosa then traces the reception of Ramírez’s work, from its first anonymous showings in the 1950s to contemporary exhibitions and individual works that have sold for as much as a half-million dollars. This eloquently told story reveals how Ramírez’s three-decades-long incarceration in California psychiatric institutions and his classification as “chronic paranoid schizophrenic” stigmatized yet also protected what his hands produced. Stripping off the labels “psychotic artist” and “outsider master,” Martín Ramírez demonstrates that his drawings are not passive manifestations of mental illness. Although he drew while confined as a psychiatric patient, the formal elements and content of Ramírez’s artwork are shaped by his experiences of cultural and physical displacement.

VÍCTOR M. ESPINOSAColumbus, OhioOne of the foremost experts on Martín Ramírez and an authority on transnational migration and art, Espinosa holds a PhD in sociology from Northwestern University and currently teaches at the Ohio State University. He is the author of El dilema del retorno: Migración, género y pertenencia en un contexto transnacional.
Loading...
or
Not Currently Available for Direct Purchase