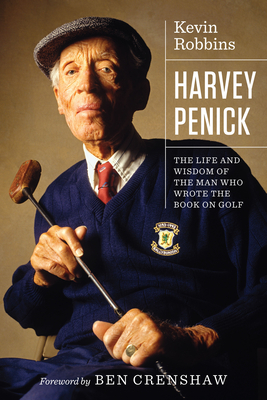 "Harvey Penick was a rare gentleman whose legacy deserves this book. Kevin Robbins has revealed through extensive and caring research the aspects of Penick's life that made him the endearing man he was. Harvey Penick: The Life and Wisdom of the Man Who Wrote the Book on Golf opens wide a window into the soul of someone whose story transcends the game."--Ben Crenshaw, two-time Masters Tournament champion

"Harvey Penick led an exceptional golfing life, and Kevin Robbins has written an exceptional account of it. His book is transporting. I have a whole new understanding of Penick, his writings, and how Ben Crenshaw, Tom Kite, Betsy Rawls, and all the others under his tutelage became the people they became. What a life, captured here beautifully."
--Michael Bamberger, author of Men in Green and To the Linksland

"Finally, the book that explains how Harvey Penick's humble, humane life led to an incomparable treasure trove of golf wisdom and insight. Kevin Robbins's work is an important contribution to golf history."
--Bill Pennington, author of Billy Martin and On Par

Millions of people were charmed by the homespun golf advice dispensed in Harvey Penick's Little Red Book, which became the best-selling sports book of all time. Yet, beyond the Texas golf courses where Penick happily toiled for the better part of eight decades, few people knew the self-made golf pro who coaxed the best out of countless greats--Tom Kite, Ben Crenshaw, Betsy Rawls, Mickey Wright--all champions who considered Penick their coach and lifelong friend.

In Harvey Penick, Kevin Robbins tells the story of this legendary steward of the game. From his first job as a caddie at age eight, to his ascendance to head golf pro at the esteemed Austin Country Club, to his playing days when he competed with Bobby Jones and Walter Hagen, to his mentorship of some of golf's finest players, Penick studied every nuance of the game. Along the way, he scribbled his observations and anecdotes, tips and tricks, and genuine love of the sport in his little red notebook, which ultimately became a gift to golfers everywhere.

An elegy to golf's greatest teacher and an inquiry into his simple, influential teachings, as well as a history of golf over the past century, Harvey Penick is an exquisitely written sports biography.