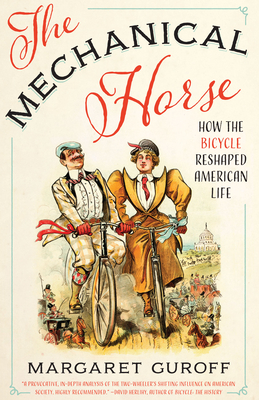 With cities across the country adding miles of bike lanes and building bike-share stations, bicycling is enjoying a new surge of popularity in America. It seems that every generation or two, Americans rediscover the freedom of movement, convenience, and relative affordability of the bicycle. The earliest two-wheeler, the draisine, arrived in Philadelphia in 1819 and astonished onlookers with the possibility of propelling themselves “like lightning.” Two centuries later, the bicycle is still the fastest way to cover ground on gridlocked city streets.

Filled with lively stories, The Mechanical Horse reveals how the bicycle transformed American life. As bicycling caught on in the nineteenth century, many of the country’s rough, rutted roads were paved for the first time, laying a foundation for the interstate highway system. Cyclists were among the first to see the possibilities of self-directed, long-distance travel, and some of them (including a fellow named Henry Ford) went on to develop the automobile. Women shed their cumbersome Victorian dresses—as well as their restricted gender roles—so they could ride. And doctors recognized that aerobic exercise actually benefits the body, which helped to modernize medicine. Margaret Guroff demonstrates that the bicycle’s story is really the story of a more mobile America—one in which physical mobility has opened wider horizons of thought and new opportunities for people in all avenues of life.


Praise For The Mechanical Horse: How the Bicycle Reshaped American Life (Discovering America)…

[A] dazzling cultural history of the bicycle . . . Guroff peppers these historical accounts with lively quotes from primary documents and her own sharp, modern insight. As she makes plain, it’s not just cyclists who have bicycles to thank for the way they get around—it’s everybody. And that makes The Mechanical Horse worth a read for the most avowed drivers, too.
— CityLab

Fascinating . . . Guroff does an admirable job reminding us of the bicycle’s lasting influence . . . [Her] book provides a colorful and helpful map of where we’ve been, and where we all might go from here.

A narrative rich in history and based on formidable research . . . But what comes through most strongly in this nicely written, fast-paced narrative is Guroff’s love for her subject. If you adore your bike, you’re curious about where it came from, and you’d like to read about how it’s changed the world, then buy this book. It’s that simple.
— Washington Independent Review of Books

Guroff has penned a fascinating account of how such a seemingly simple invention could have such a global impact.
— Baltimore Magazine

Guroff defty tells how cycling grew, literally, from the iron drasine and wooden-wheeled velocipedes in the early 19th century to giant-front-wheel penny farthings.
— The Examiner

Guroff is a confident social historian who allows her eye for the colorful detail to lead the way while never neglecting to think through the chain of incidents and inventions that paved the road from the early 19th-century draisine, two wheels and a seat but not much else, to the battery-assisted fat-wheeled wonders of today. . . . Good stories abound in Guroff's account.
— The Weekly Standard

Who knew that besides representing a marvel of mechanical efficiency, the bicycle also has a fascinating social history? It turns out that its story is a very readable tale of social change in America.
— Minnesota Star Tribune

Margaret Guroff’s survey of the role the bicycle has played in America’s social and cultural development covers a lot of ground at a necessarily rapid cadence. We learn that America’s relationship with the bicycle is an on-off romance based partly on fashion and partly on utility… Today, while cycling enjoys rising popularity in prosperous urban area, overall ridership has decreased especially among children. Guroff speculates that computers, smartphones and heightened protectiveness may mean the bicycle is no longer a suburban kid’s birthright. Let’s hope not.
— Times Literary Supplement

Guroff looks at bicycling from its early days to the present, offering fascinating insights that connect the earlier years with the present.
— AETHLON: The Journal of Sport Literature

The Mechanical Horse is first-rate popular history that ought to interest professional historians of business, capitalism, and technology.
— Business History Review

An exceptional example of an empathetic historical imagination, and fantastically good at making history accessible to all.
— Great Plains Quarterly

Margaret Guroff is a magazine editor. She is also the editor and publisher of Power Moby-Dick, an online annotation of Herman Melville’s classic novel. She teaches writing at the Johns Hopkins University.